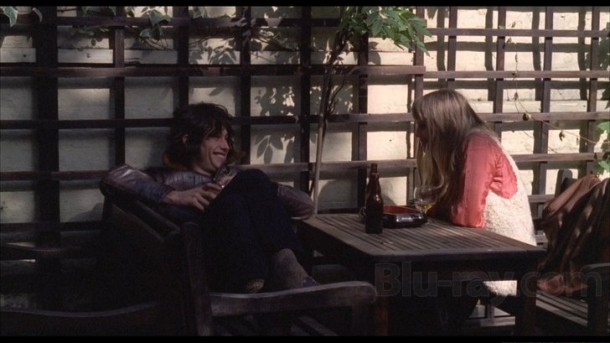 Like Bronco Bullfrog, Barney Platts-Mills’s second feature, PRIVATE ROAD (1971), is semi-improvised but this time he employs professional actors to explore middle-classe life. Peter (Bruce Robinson, later to direct the cult hit Withnail and I) is a writer taken on by a literary agency. There he meets Ann (Susan Penhaligon), a young secretary. They date, mix with Peter’s friends in a communal house, go holidaying in the country and eventually find a flat. Ann gets pregnant and is unsure about having the baby. Whilst Peter, whose first novel is rejected, finds work in an advertising agency. Their affectionate relationship is carefully tracked by Ann’s well -off parents (excellently played by Robert Brown and Kathleen Bryon). PRIVATE ROAD has a more obvious ’plot’ than Bullfrog, though it’s still structured as a series of insightfully-observed incidents. Each scene (with engaging colour photography by Andrew Sanders) has a fresh naturalism that feels self-effacing yet incisive when required and replete with laid-back criticism of its warm, very human and likeable characters.

The film opens with Stephen (Michael Feast) playing his guitar and singing a song that comes to function as an urban ballad abd commentary on the drama. Music reinforces the film’s universal themes: the need for honest friendships; young people ‘playing’ at responsibility and learning about love; the compromises of writing and inter-generational tensions. All are held together with an economy and delightful lightness of touch.

“It’s a bit of a long journey, on your own. Do you want to come?” says Peter, to Ann, boarding a train after spending a day with Ann and her parents, very early on in the film. Peter’s question is perhaps indicative of the private roads that young people travel along as they grow up. Peter appears to forget that he should stick with being a writer. Whereas Ann may eventually move on to other boyfriends. Such outcomes are subtly suggested in the film.

The intimacy of PRIVATE ROAD has been compared to the style of Eric Rohmer, but in some ways its honesty of approach has more in common with the free-wheeling seventies films of the barely-remembered director Jacques Rosier. PRIVATE ROAD was produced forty four years ago and could be regarded as a dated nostalgia trip. Far from it. Admittedly some of the conversations in the literary agency about the aims of fiction now sound unconvincing. Yet for the most part the film is still a highly watchable product of its time.
In 1971 the UK was in transition. Not yet post-hippy. And not yet ready for punk. PRIVATE ROAD exists in that cultural gap. Don’t go to the film expecting a fully worked-out story, but if you enjoy a rare look at the inconclusiveness of people’s lives and their needs and aspirations, then this engaging, often very funny, gem will appeal to you. ALAN PRICE