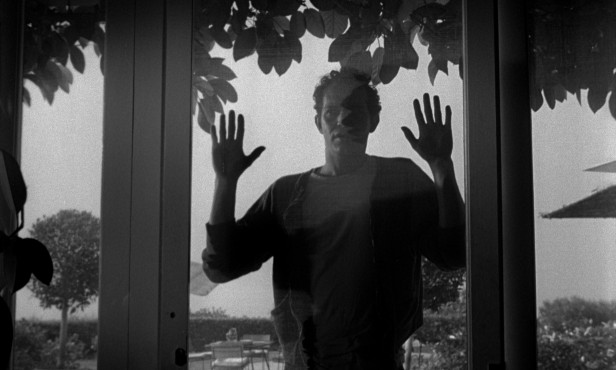 PRIVATE PROPERTY was an independent production marking the directorial debut for his own company Daystar of the Broadway playwright and screenwriter Leslie Stevens (1924-1998). Immediately condemned by the Legion of Decency when it opened in New York in April 1960, the Production Code Administration denied the film a code seal; making Private Property the first U.S. feature film to be released without code approval since Otto Preminger’s The Man with the Golden Arm five years earlier.

Seen today – without giving away too much of the plot – it’s pretty clear that what appalled the censors about Private Property at the time was less the looming threat of violence throughout than the raw sweaty concupiscence driving the three main characters – two unkempt young drifters played by Corey Allen and Warren Oates (in his first major screen role) who first spy upon, then invade the plush home of a frustrated housewife played by Stevens’s then-wife Kate Manx; later described by Andrew Sarris after her suicide in 1964 as of “hauntingly stupid blonde beauty”. (The title Private Property plainly refers to both Ms Manx and her Beverly Hills home). Filmed in just ten days in the summer of 1959 for under $60,000 in Stevens & Manx’s own Hollywood Hills home; Stevens had the great good fortune to be able to call upon the skills of the veteran Hollywood cameraman Ted McCord – known in equal measure for his extreme cantankerousness mitigated by his great resourcefulness on location while filming classics like The Treasure of the Sierra Madre and East of Eden – whose long tenure at Warner Brothers had recently come to an end and was available for a fraction of his usual fee. Under McCord’s seasoned tutelage the newly restored film looks sensational.

Although it’s lack of MPAA approval had discouraged any major distributors from picking up Private Property for a commercial release, its scandalous reputation brought it a successful run in art cinemas across Europe, and it eventually grossed over $2 million before quietly dropping off the radar for nearly fifty years (it has never been included in any of Leonard Maltin’s film guides, for example), and it would have left an even worse taste in the mouth if it had still been in circulation at the time of the Tate-LaBianca murders of August 1969. It left a lasting impression on those who saw it, however. The late Dave Godin wrote in 1999 that “Very few people seem to have heard of, let alone seen, this bizarre and strange film, but it is ripe for re-discovery as a precursor of the harsher realism that American movies were able to explore once censorship restrictions were lifted.” Finally a print was discovered at UCLA, who screened their restoration of it last year as part of its 2015 Festival of Preservation.

Sarris dismissed Stevens’s next feature, Hero’s Island (1962) – an 18th Century historical adventure in Technicolor again featuring Manx and Oates and starring James Mason – as “best left to the more esoteric film historians”; while Stevens surpassed himself with the even more esoteric Incubus (1966), a horror film starring William Shatner with dialogue entirely in Esperanto. His company Daystar had in the meantime moved into TV production, where Stevens created his biggest splash as the creator of the evergreen cult series The Outer Limits; and went on to enjoy a long and busy career in television while also pursuing an enthusiasm for New Age philosophy. Richard Chatten