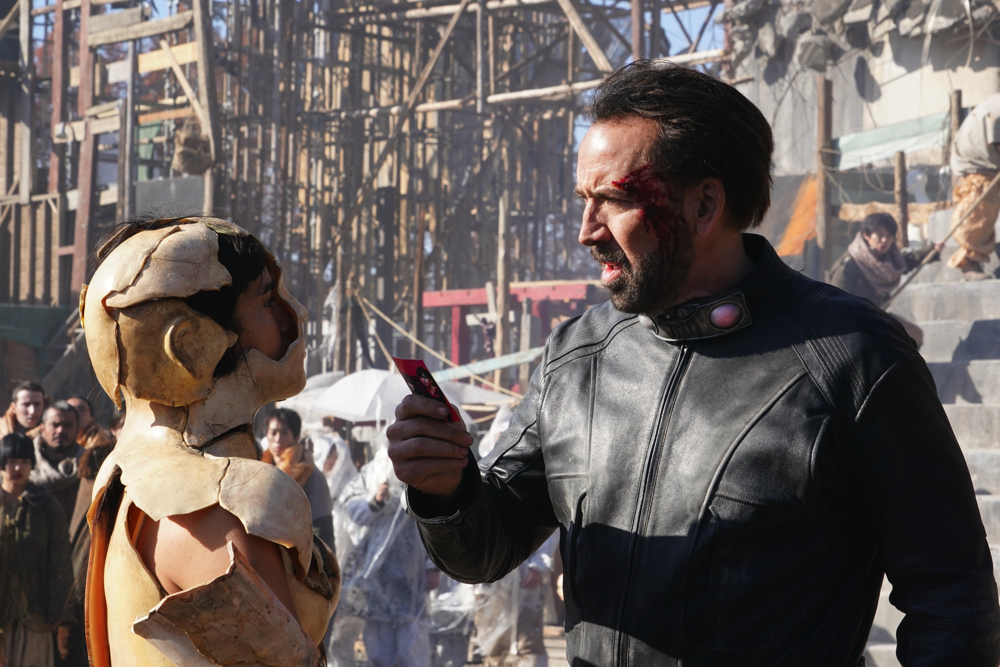 In his first English language feature Japanese director Sion Sono (Love Exposure) is still very much the enfant-terrible of today’s Japanese cinema with this wild visual extravaganza that sometimes loses the plot (by Aaron Henry and Sôhei Tanikawa). There are good bits and very bad bits. Nicholas Cage is – true to form- an OTT hero without a name – Ghostlands is a ride-and-a-half on the wild side.

Cage is first seen robbing a bank with Psycho (Cassavates), an enterprise that goes wrong and leaves Cage in prison and at the mercy of shady Governor (Moseley) of Samurai Town. letting Cage out of jail to liberate niece Bernice (Boutella) from Ghostland, wearing a suit which threatens to explode if he oversteps his time limit, and will blow up his testicles, if he makes a move with Bernice.

Ghostland is headed up by Enoch (Glover). Time has stood still since a convoy of dangerous prisoners collided with a transport of nuclear waste; Psycho being one of the victims. But Cage also recognises Bernice, whose mother he shot dead in the debacle following the bank robbery, injuring the child. Somehow the two escape and, with the help of Yasijiro (Sakaguchi), a samurai and young Susie (Nukaya), get rid of the Governor and his clique in a wild shootout with sword fights.

The Western meets the Samurai actioner and together they spawn a post-nuclear disaster movie with humans running around as Semi-Zombies clad in card-board. Cage lets fly, Boutella is underused, and in the end one no one gives a damn that nothing makes much sense. Sôkei Tanikawa’s excoriating images are wasted, as are the attempts of the audience to remember anything of the slightest importance after leaving the cinema. A void. AS

NOW ON BLURAY AND DVD FROM NOVEMBER 15th