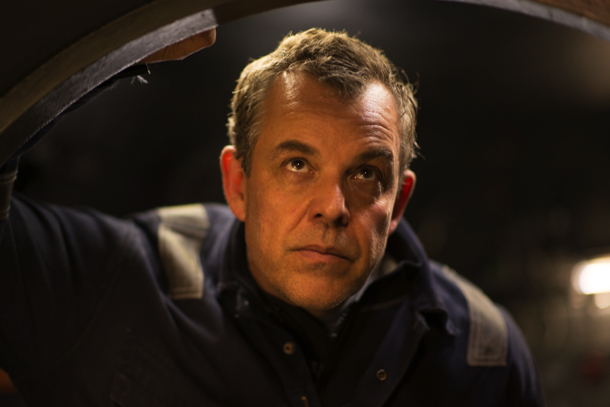 Director Ron Scalpello (Offender) has made a thriller with absolutely no thrills or tension, for that matter. PRESSURE, the story of four divers trapped in their bell on the ocean ground is trite and hollow, on devoid of cinematographic values, due to the minimal spaces where the ‘action’ unfolds.

Classics of the genre, like Apollo 13, have shown that the use of a very restricted space for a man versus nature battle relies on the use of an alternative location and a narrative which uses fully-fledged characters with interesting/contracting backstories. PRESSURE is set nearly exclusively in the diving bell (apart from a few weak flash-backs showing the protagonists’ past), and none of the characters are anything but limp and under-developed. This is a shame, because Engel (Danny Huston) has a really dodgy past, but we learn nothing of substance about him. Mitchell (Goode) is ‘the’ family-man, but what emerges is the obvious, namely that he neglects his family due to his professional absence. Jones (Cole) the rookie, is just that; and even the semi-villain Hurst (McKenna), is just a weak wreck, unable to use his hands properly, thanks to to many hours under water, he nearly undermines the rescue work of the others, but redeems himself. It is difficult to root for any of them, and the main attraction for watching a film of this type is gone.

DOP Richard Mott tries his best to conjure up some images worth remembering, but narrative and locations give him little chance. PRESSURE is simply a wreck, better left to sink without trace AS