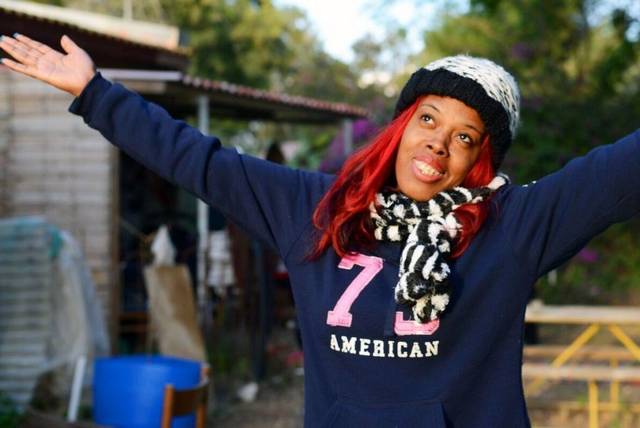 Care-home nurse Samantha Montgomery was always an active presence on YouTube where she energetically performed her own material under the name of Princess Shaw. Then a meeting with an Israeli mash-up artist finally brought the New Orleans woman into the limelight forming the subject of this entertaining documentary that brings her story to life, showing that artistic collaboration is often the only way forward.

At first, Montgomery was unaware her YouTube material was being used or that the ‘composer’ in question, Kutiman, had released a song called ‘Give It Up’ which, amongst others, featured one of her own pieces. Director Haar and Kutiman clearly recognised Princess Shaw’s natural talents as a singer songwriter. With a difficult childhood (physical and sexual abuse) and a gruelling existence, Montgomery puts her best foot forward and seems to have a winning personality. After performing ‘Somewhere Over the Rainbow’ to her charges she then goes home to find her car trashed and is barely making ends meets in her nursing job, let alone finding time to record a demo-tape or finance to get an agent to back her musical talent. Thanks to the latest technology she is able to get her strong voice and material out there and Kutiman clearly knew a good thing when he found her on the internet. Remixing and adding a full band to flesh out her basic tunes, Kutiman, a well-known and respected artist in his Israeli homeland, adds his own wacky blend of marijuana-laced musical magic to her fiesty upbeat vibe on life and the end result is amazing.

Ido Haar keeps his cards close to his chest throughout the film – which some may find frustrating – and certain salient questions remain unanswered: Did Princess profit from the collaboration? Isn’t Haar, or Kutiman, for that matter, just using her? Although Princess Shaw gets recognition aplenty, does she make any money of this venture? Well the answer seem to be a glaring ‘no’ and Haar fails to spill the beans; but where would he be without Princess?.

That said, Haar has certainly made an inspirational documentary about the modern music industry and about a remarkable woman who never gives up on her dream – and who has now found emotional fulfilment and a recognition of sorts but may be not a crock of gold – let’s hope she makes enough to pay her bills. MT