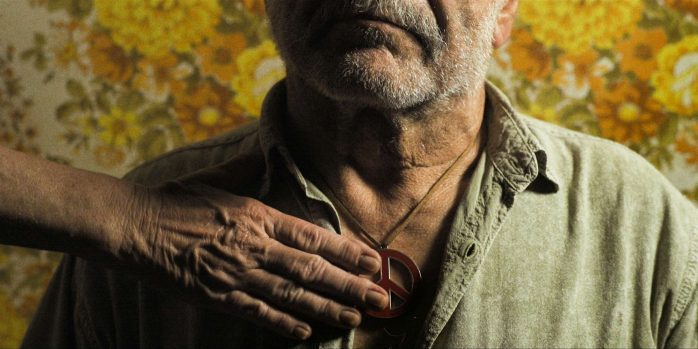 Director Jose Filipe Costa (Red Line) adapts Antonio Rodriguez’ play entitled ’25th April in a rural Village’ and transforms into a provocative feature, exploring how the rural population reacted to the Portuguese revolution of 1974. Often funny, but very much in a Brechtian mood, it confronts the real world with the wishful perspective of revolutionaries from home and abroad. Once again, town and country collide, as we’ve experienced in Brexit.

The protagonists from 1975 have aged considerably: we meet them travelling in a camper van (which breaks down) and by train. Mick, who came from London when he was eighteen, was one the many foreigners entering the country to live a proper revolutionary life: “I did’nt think revolution was possible in Europe, I thought, it could happen only in South America”. Others come from Berlin and France, they all are meeting in Cova da Piedale, where their Luar Cell are building a hospital for gynaecology and paediatric services.

As the outsiders gain a grasp of Portuguese, it soon becomes clear that the village males have no intention of doing any housework.  The women, who also have to milk the lambs, work in the fields and look after the children. A meeting of the group is called, where the men will have to defend their laziness. Instead they spend their time in ‘creative pursuits’, writing pornographic poems – and teasing their wives about them lacking a sense of humour. The foreign women quote Reich, the inventor of Orgastic Potency, which will ‘help to bring about World Revolution’.

On the ground, men are told to do the washing up and when they refuse, one of the women gets out the dice, and three men end up with the lowest score. Embarrassed they head for the sink.  But while the village women toil away every Saturday doing the washing by hand – the men spend their work-free weekend in the café. The Portuguese men start to blame the European women for the gentle uprising amongst their other halves. who complain “even the young boys behave like domineering tyrants.” The lack of sex-education and a repressive sex life seriously undermines the females’ quality of life. And in a play put on by the group, the men are  seen defending the dictator Caetano, who had been brought down in 1974.

Finally in November 1975, a radio broadcast announces the Portuguese state’s expulsion of all foreign revolutionaries, “because of their destabilising interference in this country’s politics”. The village men let some of their foreign counterparts stay (even though Mick has to cut his hair short). But the women will go. There is a short scene near the end when in one of the last public meetings, the mayor declares “servants do not exist any more after the revolution”.

Costa and DoP Hugo Azevedo have used close-up intimacy and theatrical effects to show the lack of real change. Patriarchal power has not diminished, and the status quo remains unchanged: it seems that the women are prepared to except things just the way they always were. And this was very much the case with Gramsci in rural areas of Southern Italy, progressive forces have had very little impact in rural Portugal. Costa’s lesson needs to be heeded – in any society – before it can claim to be liberated from feudal structures. MT