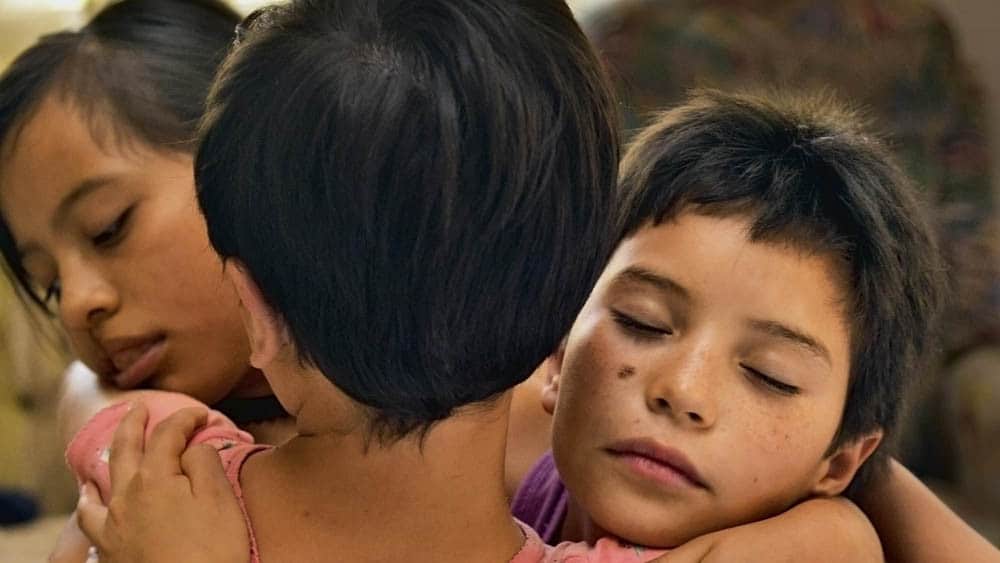 Making its premiere at this year’s Un Certain Regard sidebar this lush and haunting tale of friendship and survival draws us into the vortex of oppression and fear felt by three girls growing up during wartime in rural Mexico.

Based on the 2014 novel by Jennifer Clement this is the latest human drama from Tatiana Huezo who has been quietly raising the profile of social and personal abuse for woman all over Latin America – from Civil War in El Salvador (in El Lugar mas pequeno in 2011) to human trafficking in Mexico (Tempestad (2016)). This is her third and most accomplished feature to date.

In a tight-knit community nestled in the Mexican mountains, we first meet eight year old Ana (Ordonez Gonzalez), digging a hole in the ground with her mother Rita (Batalla). Ana will hide here when the guerrilla soldiers come to kidnap the local girls. They will be turned into captives and slaves. In the bosky remote hillside violence is an everyday part of growing up. So Ana and her two friends create their own impenetrable parallel universe where they play at being women, comforting each other with an affectionate bond of friendship, singing and painting their lips with beetroot. Soon Ana’s long hair will be cut into a boyish crop to avoid detection. On lonely days she hides out in the empty houses of villagers who have long disappeared or fled, such as Juana and Don Pancho, whose abandoned flock of cows now roams free in the village.

Strong on atmosphere the film is cinematic study of what it means to grow up as a girl in a hostile environment where men are almost constantly the enemy. Ana’s father is supposedly working on the other side of the valley but he has not sent money back for several years and so Ana and her mother are forced to fend for themselves on the brink of poverty. One surreal scene pictures Rita desperately trying to get a mobile signal on the top of a mountain, along the other abandoned women whose ‘phones light up the darkness like mini torches in the gloom.

Five years later, at thirteen, the girls become teenagers as they face the harsh reality of what being a woman really entails in this toxic climate of war and macho culture. Abstract danger becomes an inescapable threat, as a Russian roulette plays out one day when soldiers arrive to take Ana, forcing her into the dugout as her mother is threatened with death.

Some films are moving but this rich character drama is actually harrowing too, as we become emotionally invested in the girls’ story, joining them in their descent into traumatised hell as a daily experience. The casual involuntary abuse from Ana’s mother is echoed by the disorientating fear she feels from the outside threat. Ana – both as a child and a teenager – is impressively performed by two newcomers (Ordonez Gonzalez and Membreno), and is matched by Huezo’s assured direction and luminous camerawork by Dariela Ludlow. MT