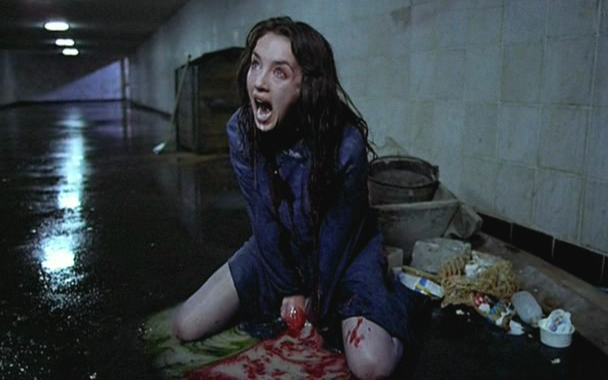 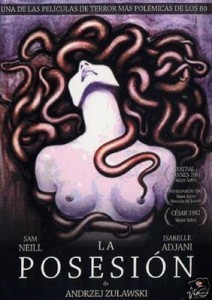 In the opening scene of Andrzej Zulawski’s POSSESSION, Isabelle Adjani (Anna) meets Sam Neill (Mark) outside their Berlin apartment block, on his return from a business trip – she appears to be dressed in mourning. It then emerges she wants a divorce, and the two of them descend rapidly into a frazzled state of anxiety – Mark rocking to and fro in a cold sweat and Anna sobbing down the telephone from her new lover’s place. Mark (a self-confessed misogynist) seems less concerned about the divorce, but is eaten up with jealousy that Anna is having sex with another man – and enjoying it. Confronting her lover Heinrich (Heinz Bennent) in his spacious book-filled apartment, Mark is understandably indignant. Heinrich is dressed like a flamenco dancer; black shirt slashed to his ageing midriff. Embracing Mark, he appeals to his sense of fair-play in understanding their mutual state of flux.

Initially banned in the UK; this is the Russian-born Polish film director’s most controversial film. Many claim to be shocked and traumatised by it; others to find it a total enigma, even a laughable mess. Certainly it gives full throttle to the full-blooded emotional fall-out when a relationship goes wrong – but this is not social realism; it is mannered horror. Isabelle Adjani won Best Actress at Cannes for her histrionic, ‘obsessive compulsive’ performance – which involves an electric carving knife – and Neill is also at his most viscerally raw, switching from demonic anger to childlike vulnerability (his eyes are especially weird – an effect achieved by coloured contact lenses), as he pleads with Anna to share her feelings so he can work to make it right. Meanwhile he is also trying to negotiate a deal with his employers and look after his infant son Bob.

Filmed by ace DoP Bruno Nuytten (Jean de Florette) in the frigid blue light of a rained-soaked Berlin winter in Kreuzberg and Mitte’s empty streets, there are unsettling vignettes where Anna is at one point pursued by a government official who asks to check the windows of the apartment where she is now living (having left Mark). In this apartment, she has produced – or apparently given birth to – a strange octopus-like blob of gore, that masquerades as a gigantic living foetus. When the inspector discovers it, she glasses him in the neck with a broken bottle of red wine, having previously offered him a drink. In another she plays Helen, a teacher from Bob’s school, and turns up unannounced to read to Bob and do the washing up for Mark: the two end up in bed. The dialogue is often dead pan and banal compared with the heightened melodrama that accompanies it – after trashing Mark’s living room in a blind rage Anna announces blandly: “I have to give Bob his yogourt”.

Admittedly, the film is a carnival of sensationalism, yet we feel nothing for the characters nor their trauma as their feelings are completely unconvincing – they are merely the psychotic and narcissistic projections of sociopathic cyphers, totally lacking in authenticity or a scintilla of humanity. Although Zulawski attempts to generate horror, as an audience we feel entirely alienated and detached from the narrative, however gory, blood-soaked or deranged it becomes. A fantastic curio and the perfect antidote to romantic Valentine’s Day. MT