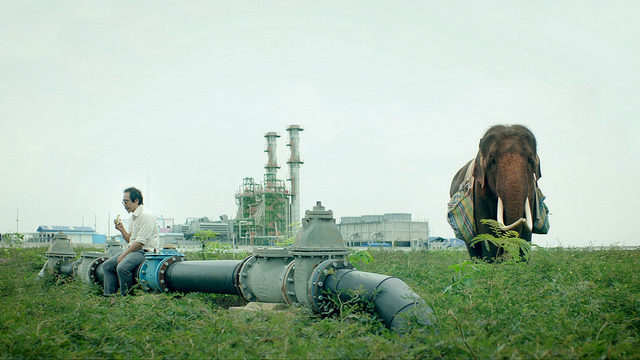 Kirsten Tan’s enchanting film debut follows a disillusioned romantic and his elephant across Thailand on a mission to connect with the past. This deceptively simple tale has so much to say, most of it non-verbally, about the ennui of urban life and nostalgia for love, and does so with an understated gracefulness of touch, a distinct visual style and an astringent humour that shows considerable maturity and insight. Clearly she has thought a great deal about her script and subtle characterisations, and it shows.

World-weary Thana (Warakulnukroh) lives a banal existence in plastic Bangkok. Once a well-known architect, his marriage to a shopaholic (Sirikul) is soul-destroying, and his clients now prefer technology to his personal approach. One day he leaves home and just keeps on going, reuniting on the way with his childhood pet Popeye (Bong), a fairground elephant destined for the scrapheap. The two become soulmates in their eventful journey back to Thana’s hometown of Loei, where faded flashbacks reveal how Popeye joined their village life after his mother was shot dead.

Thana opens his diatribe on the perils of city living, in the first of several encounters with helpful strangers the unlikely couple meet along the way. Another more spiritual interlude involves a Buddhist pauper Dee (Khumdee) who senses his end is nigh and whose final wish is to see his estranged girlfriend, who redeems herself in the final scenes, along with Thana’s long-lost uncle (Pongpab) who has a few surprises up his sleeve. Meanwhile, the police take constant potshots at Popeye: roving elephants are regarded as a ‘threat to the public tidiness’, as they continue their illuminating journey. Chananun Chotrungroj’s clever camerawork draws similarities between the misty landscape and Popeye’s vast hindquarters, uniting beast and countryside in a metaphor for Thailand’s lost rural traditions, in poignant contrast to the brash and alienating march of progress unfurling in Bangkok’s glitzy skyline.

Tan’s characters are as subtle and complex as every one of us, and each brings out a new dimension in her story, revealing bittersweet ironies and universal truths, but always with spry humour. And all the while, Popeye is the sad reminder of the country’s past, seen through his knowing gaze and gentle demeanour. MT