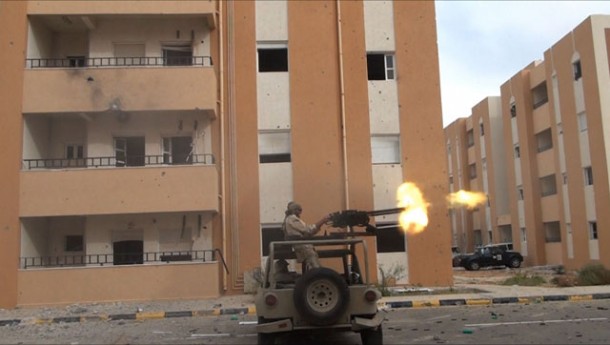 In 2006, twenty-six year old Matthew Vandyke left Baltimore, Maryland bound for a “crash course in manhunt”. A ‘germophile’ Matthew was suffering from OCD and his journey would take him via Spain and West Africa to Afghanistan, filming himself on his motorcycle. After returning to Maryland, he made a second foray in 2011 accompanied by friends he made in Libya on his first visit. The purpose was to topple the regime of Muammar Gaddafi.

Marshall Curry (STREET FIGHT) introduces us to Vandyke via childhood videos, showing an average kid wanting to be a hero. The adult Matthew, in contrast, is timid and fearful but gains an MA. When he goes on his first journey, he is supported in his action by his fiancée, who later brands him “a coward”, after he almost gives up his trip early on due to an accident. In Gibraltar we get the first inkling how POINT AND SHOOT will develop when we see him pointing at US soldiers, declaring “it was how I imagined it in a script”. During the whole film, Curry lets his protagonist get away with this ambivalent attitude: “I fight with two hands: gun and camera”.

When returning to Libya, Curry never mentions that Matthew’s complete lack of military training and inability to speak Arabic made him more of a burden than a help to his co-fighters – particularly since Matthew had overcome his OCD, but not his fear of hurting others. But instead of pointing this out to Vandyke in the talking-head interviews in Maryland, Curry falls for Matthews line: “The Arab spring challenged (my interpretation of) what it was to be a man”.

Captured by Gaddafi forces, Vandyke spent nearly six months in a gruesome prison. Instead of making this terrible experience the centre-point of this documentary, Curry uses animated flashbacks designed by Joe Posner, to portrait his hero’s suffering. The Arab world is shown exclusively out of Vandyke’s American perspective – making it an exotic place where Vandyke (calling himself for a while Max Hunter) is the intrepid explorer and adventurer – very much in the mould of Matthew’s role model, the Australian Alby Mangels, a second rate ‘Crocodile Dundee’ character. The crux of all this is summed up in a post-fighting scene when one of the Arabs tells Vandyke; “I send your body home in a posh coffin as a souvenir for your mother”. This is ‘Boys-Own’ talk, and has nothing to do with a serious quest for manhood. Time after time, Curry does not question Van Dyke letting him get away with the self-portrait of a “real man”.

Camera work is uneven, even during the second journey the audience is treated to a impressive travelogue. And nobody mentions that Libya today is one of the most dangerous countries in the world. Instead we get the impression of a US version of ‘Lawrence of Arabia’ – liberating the Arabs from the front. AS