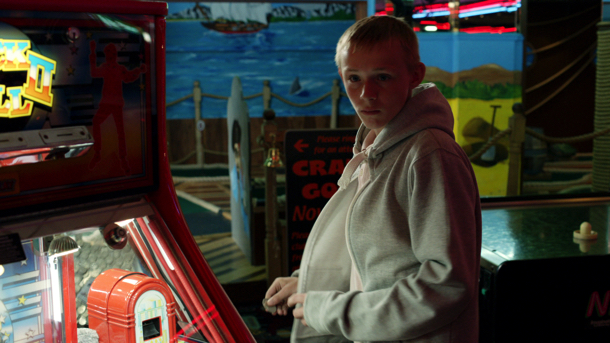 Another British indie in similar vein to Blood Cells and Dead Man’s Shoes, centres on a sensitive ex-military man who goes back to his home town to find that things have changed and, sadly, for the worst. This time we’re on the North Lincolnshire coast, a once wealthy area until the fishing industry died and left a decent but poverty-stricken community to fend for themselves. ‘Pleasure Island’ refers to the theme park that grew up in Cleethorpes in the early 90s to create jobs and a lifeline for the locals.

Thoughtfully-crafted with a fabulous sense of place evoked by Shaun Cobley’s limpid visuals of the fish-market, Cleethorpes’s stunning beaches and aerial shots of the harbour, PLEASURE ISLAND is well-acted by a decent British cast led by Ian Sharp (as Dean), who is at odds with his pigeon-fancier dad Tony (Nicholas Day), who runs an ingenious side-line in North Sea skulduggery involving his birds. Meanwhile Dean’s ex Jess (Gina Bramhill) is a now a single mum who strips in the evenings for extra money, pimped out by Connor, a nasty coked-up businessman with a penchant for Caribbean shirts (Rick Warden),

Despite a promising start, PLEASURE ISLAND suffers in the script department from a rather cardboard set of characters for the most part. Although Tony, his rivals Connor and boss Russ (Paul Bullion) are well-drawn and authentic enough, the story soon descends into the usual narrative-style of this misogynist Britflic genre: loutish lads versus passive lassies, with dialogue resorting to endless effing and blinding in place of more convincing parlance. Women get the rough deal here and are portrayed as weak, pathetic characters who invariably get beaten up and verbally abused. Sadly, Jess and Cordelia are no different, endlessly giving in and showing no back-bone whatsoever. So it’s left to Ian Sharp’s Dean to come to the rescue with his military training, avenging Jesse’s honour and sorting Tony out in the process. Sharp does a good job as a strong and silent type but somehow Dean lacks ballast on the characterisation front. There is something pathetic about all these people, and at the end of the day, you can’t help feeling sorry for them all in their downtrodden lives, trying to make the best of things: they come across as sadly comical rather than deeply venal. So there is much to be admired about Doxford’s feature debut which is appealing and watchable despite its flaws. And despite the violent overtones, he softens a tragic story of love and loss with moments of calm combined with a gentle atmospheric soundtrack from The Jive Aces. MT