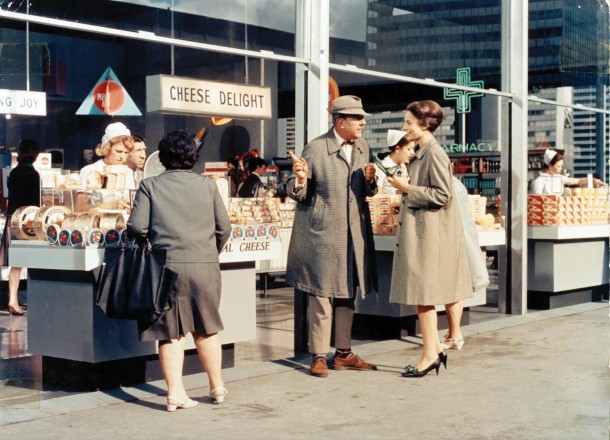 When PLAYTIME was originally released in France it took a massive hit at the box office: Jacques Tati, had shot the film in 70mm and insisted, rather dogmatically, that it should only be shown in this format which many most cinemas couldn’t screen it. But watching it nearly sixty years later, you soon realise why it was such a big flop, regardless of the format.

Tati admitted he was disgruntled ‘his’ rather dorkish character, the  Monsieur Hulot, who goes for a job interview in a modern high rise office block, gets lost, misses his appointment, and finally leaves the building through the wrong exit ending up in a trade fair featuring the latest gadgets. There he meets an American tourist (Dennek) visiting Paris with her group. She takes a liking for Hulot, but he manages to lose her in the crowd. Then, after bumping into a fellow soldier from WII, Hulot finally meets the young American again at a nightclub opening, where everything that could go wrong, does so. That said, a great time is had by all, and as a bonus, he meets the man who was supposed to interview him for the job that morning.

Hulot is his usual timid self, overcoming obstacles by chance rather than intent. One of the running gags involves a series of lookalike Hulots – actors smoking pipes and wearing hats – who are often mistaken for the man himself. The standout is a German salesman who starts off being polite and understanding, but soon looses his temper – and customers. In the nightclub sequence, there are some amusing scenes where the air conditioning gets out of control and part of the ceiling collapses, but the supposed anarchy comes across as rather muted and contrived.

Dennek feels anything but young, recalling the sort of teachers we had a crush on at school. The jokes about English infiltrating daily life are too obvious to be really stinging. And although the scenes in the nightclub are supposed to be mildly sexually-charged, all the characters come across as asexual, the women playing second fiddle to the men. Playtime seems tethered to the past: Hulot keeps meeting WWII soldiers everywhere – and considering how easily the Germans moved in and occupied France (supported by the huge majority of the French), this reflects the uncritical ideology of a feature which seems to be blithely rooted in some mythical past without any contradictions regarding race, class or gender.

Playtime has its place as a charming document of film history, and fans will enjoy the nostalgic trip down memory lane, but it overstays its welcome at over two hours. . AS