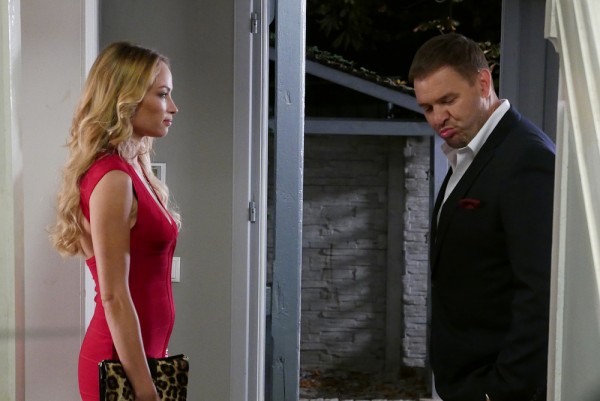 Director Mitja Okorn’s portrait of contemporary Polish society is a bitter farce about a nation in the grip of media mania, where everybody lives on their smartphones scrambling for public success.

Ania (Wiedlocla), a timid music teacher, and TV host Tomek (Suhr) could not be much more different at the outset. Fighting for a place in the sun on all levels: at school she has to share the gymnasium with boisterous boys, who drown out her class with their ball games,  and at home, she is repressed by her mother (Stenka), who has not to come to terms with the death of her husband, and is needy for attention despite Ania sacrificing a career as a concert pianist to look after her.

Tomek is cocksure to begin with, but his bravado – usually in form of obnoxious, misogynist remarks in front of the camera – is hollow. The TV presenter relies totally on his producer Marcel (Glowacki), who he has copied since secondary school. Tomek picks Ania as one of his contestants for his TV Internet dating show, where he uses a puppet to represent the put-upon music teacher. Meanwhile, Ania’s best friend Ola (Ksiazkiewicz), married to the bone-headed Bogdan (Karolak), is set up by her step daughter, the teenager hoping to get rid of Ola. Ania ends up falling for Antoni (Czerneck), a grieving widower with a little daughter, who joins Ania’s class. But Tomek becomes jealous and wants to sabotage their relationship.

Just when the story is heading for happy-endings all around, destroying everything shown before, a surprising turn of events proves the shallowness of the characters who, sadly, prove to be as shallow and self-seeking as the premise suggests. Below the saccharine coating of the jokes and over-the-top gags THE SINGLE LIFE is suffused with bitterness, and there is a palpable sense of disillusionment with a society that encourages personal and professional success to be played out to the greatest possible audience. DoP Tomasz Madejski (The mighty Angel) conjures up brilliant images at TV the Station (with a viciously ruthless station boss), and behind closed doors, where people imitate their professional counterparts desperately searching for recognition and positive ratings, spinning their own stories with great aplomb. Enjoyable and illuminating, but at 136 minutes far too self-indulgent.