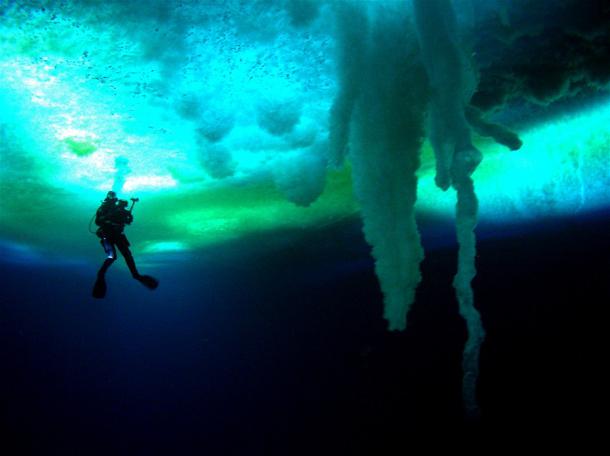 It’s important to remember that this film is made for and aimed at a school audience and American heartthrob Josh Duhamel, famous for The Transformers franchise The Picture of Dorian Gray and New Years Eve will no doubt give this film the requisite boost it needs to reach the attention of kids, although it must be said, his voice sounds far older than his years, giving the film a gravitas it may have lacked otherwise.

Although it is telling us a story or indeed stories we may already know, I terms of ice caps, global warming, over fishing, etc., Planet Ocean manages to tie a great many of these huge and perhaps disparate seeming ideologies together into a cohesive and digestible whole.

The content is also quite splendid, with stunning underwater footage shot by Denis Lagrange, in some of the most inhospitable environs on Earth; so sumptuous it feels almost Computer Generated, inter-spliced with some terrific and carefully considered aerial photography by Nel Boshoff.

This combination keeps the eye-candy coming and allows Duhamel’s sonorous voice to do its work, feeding us stats and info in quantities that, if left to the classroom, would have children soon wondering whether they’d had any texts.

By exploring our connection to the sea, our continuing dependence upon it, its overwhelming impact upon our lives, the extraordinary diversity and beauty therein and then highlighting our own escalating abuse and lack of management, the film makes its point.

And this is its central concept; that although we regard ourselves as Planet Earth, we are covered far more by oceans than dry land and the forces at work across and within the oceans have a far greater and immediate impact upon us than we are aware of.

Yet, although these oceans are vast beyond the capability of the mind to properly grasp, they are of course still finite and if we continue to plunder, pollute and ignore them, not only do we alter them irrevocably, we inevitably impact most drastically upon ourselves.

Finally, it attempts to answer the ‘well, what can we do?’ question on everybody’s lips; the overwhelming sense of inevitability, the monumental, all-encompassing size of the problem and the feeling as an individual of total helplessness in the face of far flung continents, corporate machinations and market forces.

But we also know that public opinion has the ability to move mountains and to stop big business in its tracks. That is what this film asks us all to do now… for the sake of all of us. AR