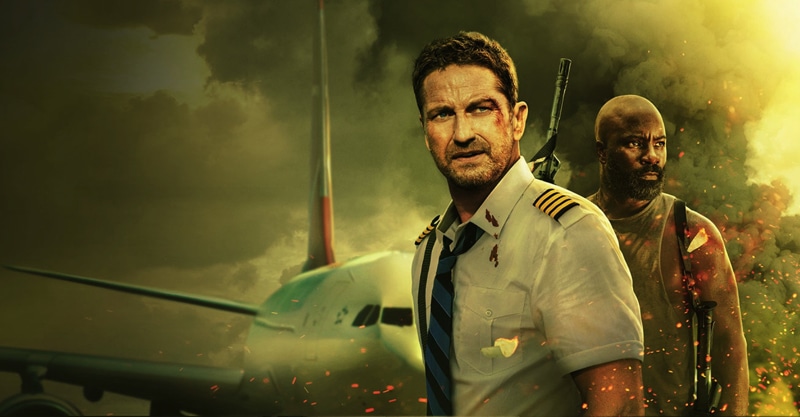 With a title like Plane we are not expecting anything special – and while this airborne thriller doesn’t break any new ground, it will satisfy its “Boys-Only” brigade audience who like things ‘retro’. Plane is an 80s throw-back to films like Under Siege and the Cannon Group vehicles who even made it onto the ‘Red Carpet’ in Cannes back in the day. So let’s not pretend we never saw the like of it before.

Like all Action Man features, Plane relies on a leading man at the helm, and Gerard Butler, 53, still fits the bill. Now the older statesman of the “Save the World” Brigade his hang-dog pilot Brodie Torrence (widowed, with a daughter waiting for Daddy to return for New Year’s Eve) pilots his jet with just 14 (!) passengers from New York to Tokyo. One of them, Louis Garpare (Colter), is a murderer being accompanied by an FBI agent to his new prison home. Alas, an electric storm puts an end to all communication equipment on board, and Torrence has to land the plane on a small island in the Philippines. Needless to say, his troubles have only just started.

The corporate leadership, whose penny-pinching dictates are responsible for the catastrophe in the first place, want to let Torrence and his acolytes fight it out. But ex-military commander Scarsdale (Goldwyn), who has taken a liking to Torrence (having watched a video of him putting a passenger into a headlock), alerts his ex-buddies from the Special Forces to help ‘unlikely lads’ Torrence and Colter contain the local guerrillas under the leadership of a certain wild-eyed Jummar ((Taylor), so Torrence can get his plane into the air again, in time for New Year and his daughter.