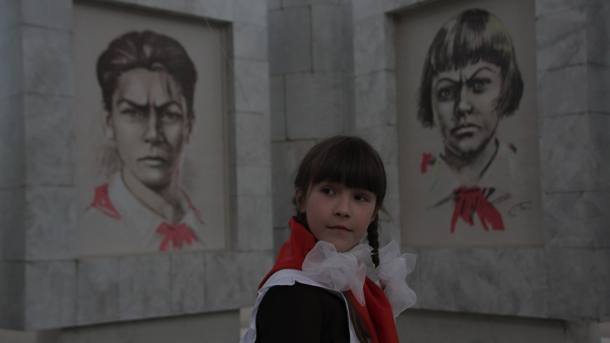 Writer\Director Natalya Kudryashova’s debut drama PIONEER HEROES, in which she also performs, sets out with good intentions to be a sort of Russian BOYHOOD. Sadly, the result is a muddled documentary-style piece that overstays its welcome, despite some convincing and even touching performances from the assemble cast.

Kudryashova follows the lives of three Russian kids born in the Soviet twilight years: Andrey, Olga and Katya, who attend the ‘Vladimir Ilyich Lenin’ youth academy in the late 80s, until the present today. As kiddies, still wet behind the ears and full of excitement and patriotic enthusiasm, they are desperate to do the right thing by their country and we see them pledging allegiance to organisation. The only one who stands out from the crowd is Andrey – refusing pointblank to sing a solo in the choir, he later grows into a troublesome and frustrated young man, unhappily dating the endearingly gentle Katya. As little girls, Katya and Olga take their soviet origins very seriously, Olga even informing the authorities about her father’s crude attempts at home-brewing when she happens to a watch a political propaganda broadcast on TV, exhorting comrades to snitch on illegal  bootleggers.

It emerges that the bright aspirations of the Soviet Union of their childhood has failed them in adulthood: their immense pride for their country as kids simply does not prepare them for mundane modern life, leaving them saddled with expectations that simply to not deliver success, fulfillment or even security in the sober reality of contemporary Russia. A qualified actress, Olga is receiving psychotherapy for depression, PR girl Katya lacks the self esteem as a young woman to command any respect or attention from Andrey whose thoughts are completely focused on making headway in his political career, rather than enjoying his relationship in their upmarket modern apartment in Moscow. On his way to a business meeting he manages to help out in a unfolding tragedy and wonders whether his intervention is really what it means to be ‘a hero’ in modern times. This is a sad and depressing view of today’s Russia from a disenchanted and desperate voice that would make Stalin turn in his grave. MT