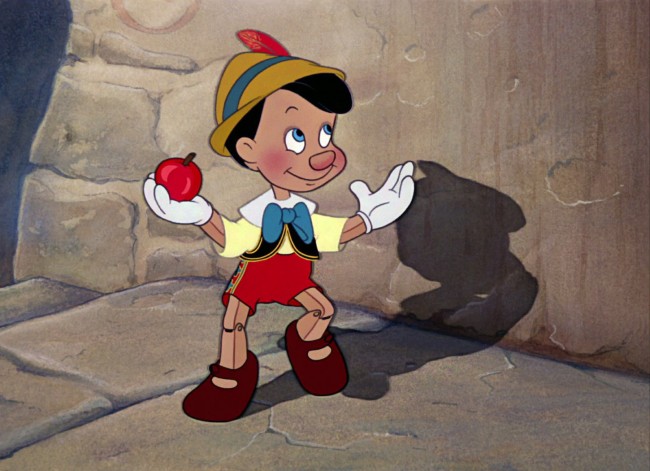 Carlo Collodi’s Adventures of Pinocchio is now considered a classic of children’s literature. Yet perhaps fewer people have read an unexpurgated edition of the book than watched Disney’s 1940 film version on the big screen. In print Pinocchio is a bad lot: obnoxious, rude, unruly and only learning to conform to society after being tortured.

With Norman Ferguson’s collaboratively directed animation we have a Disneyfication of the wooden puppet/boy. Pinocchio’s naughtiness is more redeemable due to his charm and naivety. So Walt Disney may have opted for a softer version of Pinocchio, but his film is not without its darkness.

The certification on the new blu-ray edition of Pinocchio is U and “contains no material likely to offend or harm.” True for today’s kids. Yet if you are an adult of an older generation who first saw Pinocchio between the ages of 8-10 then you might have been freaked-out by its “Pleasureland.” Here little boys are turned into donkeys and shipped across the sea to China. This was such a scary idea that you probably checked your head and bottom hoping that a pair of floppy ears and a tail hadn’t suddenly sprouted. Last night I still felt a twinge of infant fear whilst watching Pinocchio on my crystal clear blu-ray edition.

Disney and his writers shrewdly selected enough of Collodi’s negativity to make this moral tale work. Particularly in Pinocchio’s scenes with boy criminal Lampwick who introduces him to drinking, smoking and gambling. Disney’s moral is that children must learn the benefits of hard work; fear the working classes; always consider others and join the middle class to get on in life. You can accept or reject that message. However, that Pinocchio is a work of art is simply unequivocal – such is the dazzling brilliance of its animation and the camera dexterity, colour, line and shadow – making it a landmark.

Pinocchio’s realism is best illustrated by the underwater episode: Geppetto, the puppet maker, his cat and goldfish, have gone of in search of Pinocchio and their boat has been swallowed by a whale. Pinocchio and Jiminy Cricket then journey down to them. For the rescue from the whale (Monstro) we are presented with artwork of a terrifically high order. Disney’s animators have a feeling for the sea with its spray, crashing waves and turbulence that is so sensual, it actually makes me feel as if I’ve been swallowed then thoroughly drenched as the whale sneezes everyone out of its body. Monstro is comparable to the whale of Huston’s Moby Dick or Spielberg’s Jaws. Only A Perfect Storm soaks me more.

Apparently, Disney is set to do a live action re-make of Pinocchio. Paul Thomas Anderson did some writing for it and was then dropped as a possible director. Now Ron Howard is attached to the project. Even if it manages to conjure up Collodi’s cruelty, I will still love their earlier effort which was the masterpiece of Disney’s animation studio. Besides, any attempt at a more faithful adaptation would involve Pinocchio killing Jiminy Cricket by stamping him underfoot. No, Walt or Ron. Not that! Alan Price.

PINOCCHIO IS NOW AVAILABLE ON BLURAY