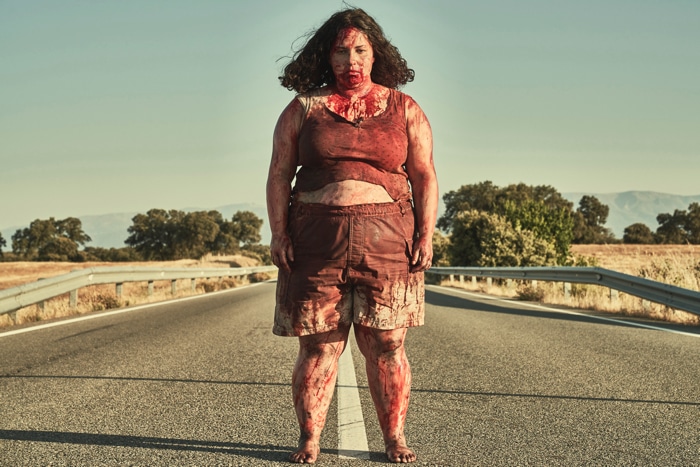 Always original – surreal even – Piggy is a vibrant coming-of-age psychological revenge thriller from Spanish director Carlota Pereda, developed from her 2019 short film of the same name, that shows how in some European countries obesity is still socially unacceptable.

The opening shot sees the main character Sara (Galan) standing in her parents’ butcher shop in small-town Extramadura, her homework soaked in pig’s blood. Outside, three girlfriends Claudia (Ferreiro), Roci (Aguilar) and Maca (Salas) are about to go swimming with the local boys. Sara is not only over-weight she is downright obese. And her parents have made things worse by favouring a younger brother. What follows is a disturbing but all too common look at teenage bullying that can lead to emotional trauma.

When Sara eventually gets to the pool her girlfriends try to drown her with a lacrosse stick in an extreme act of bullying, stealing her clothes in the process. Waddling home in her bikini, the tables are soon when she is accosted by car carrying her screaming friends, driven by The Stranger (Holmes). In a supreme act of revenge Sara ignores their desperate pleas for help, and heads back to the village where more horror unfolds when a video featuring her being bullied by her pals has been circulated by Claudia’s boyfriend Pedro, who has deleted it “out of pity”.

Scenes of graphic horror unfold in the revenge spree, not only in her parent’s house but also in a  slaughterhouse in the nearby countryside, where Sara gets her own back on the entire village. And this being Spain, a bull –  in this case an escaped prize fighter – also colludes with The Stranger in the ensuing bloodbath. In her clever script Pereda clearly implies that he might also have been a victim of bullying like Sara. Far from being just a slasher, Piggy is a startling and intelligent look at teenage angst, complete with a complex blood-soaked narrative. AS

IN CINEMAS FROM FRIDAY