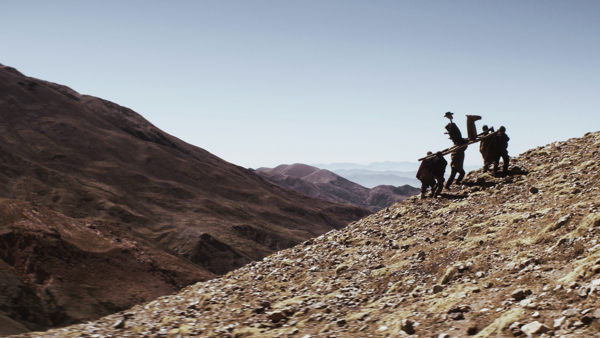 High up in the Andes mountains a herder sees his lamas threatened by a puma in this impressive feature debut that melds fiction, documentary and ethnographical elements to tell a mystical story full of breathtaking landscapes. Co-writing with Distefano, Tarraf makes minimal use of dialogue, which is mainly in the native Quechua. A unsettling soundscape accompanies this haunting piece of filmmaking.

Set on the widescreen and in intimate close-up the film follows herder Ricardo and his family. And although they seem cut off from humanity in this remote part of the world the hypnotic human interest story very much connects to a global narrative of survival for small communities everywhere. Pitting his wits against animals and the elements rather than sales figures and corporate competitors, Ricardo is constantly aware that self-sufficiency is paramount: one of his lama pelts barely fetches £5, and no one seems very interested in the animal’s meat when he eventually makes it to the nearest market, a long trip away on foot and bus.

So tracking down the puma is vital. According to local custom, he must also make an offering to the beast. At one point an anonymous funeral cortege passes by serving as a token of awareness of the fragility of man’s existence here, rather than marking an actual death. The herder joins in chanting: “do not forget you are mortal”. The burning byre is an eerie counterpoint to the darkness enveloping the ‘mourners’ as they commune in silence.

Ricardo’s quest for the puma is gradually transformed into an exploration of something deeper and more spiritual. The Andes are a mysterious range of mountains that seem to possess a transformative power. The white horse in the opening scene becomes the wooden statue representing death. Meanwhile the titular lone monolith metamorphoses into an Andean version of Ayres Rock with its strange potency that suggests an otherworldly force is at play beyond the humans and their animals. MT