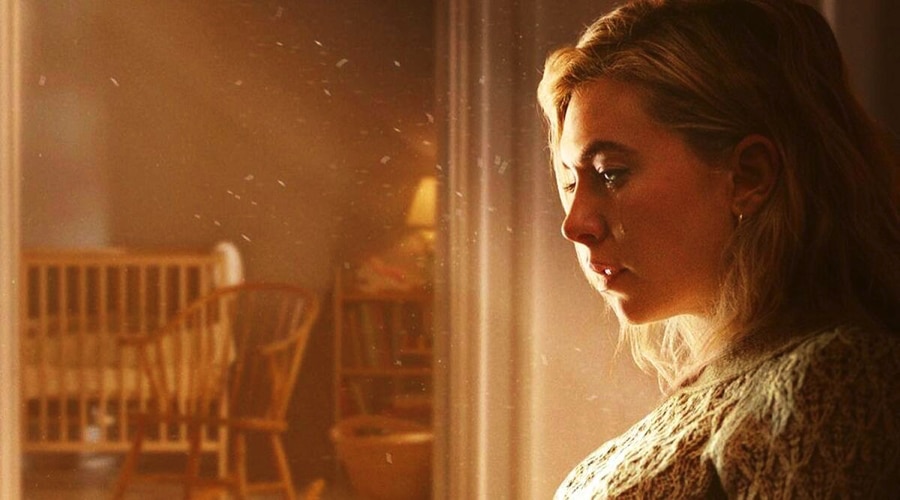 Nothing prepares us for sudden death. But the most confusing part of bereavement is how is it affects those around us, and particularly those nearest to us. And this unexpected behaviour is the crux of Kornel Mundruczo’s latest film. It looks at how the loss of a child affects a professional Bostonian woman called Martha (Vanessa Kirby/The Crown) and her stevedore partner, a recovering alcoholic who hails from Seattle (Shia Leboeuf).

The Hungarian director’s first outing in English is as deeply flawed as the title suggests, a tonal mishmash: moving in parts but totally incoherent in others. The euphoric early arthouse scenes – impressively shot in one 24 minute take – show the couple during the birth, and these intensely personal moments are graphic in detail. Almost too much so. But the baby dies shortly after she is born leaving the couple in disarray and arguments and recriminations follow. And as Boston descends into a freezing winter, amid wide panoramic shots of the Charles River, so Martha retreats into herself cutting Sean adrift in an icy silence.

Based on his own personal experiences this is clearly a cathartic film for the director writing with his real life partner Kata Weber. But the film soon drifts into a more glossy family drama where the grief-stricken Martha is persuaded by her controlling mother (Ellen Burstyn in formidable form) to seek compensation from the midwife. As Martha’s relationships deteriorate all round her so the storyline unravels with no real sense of direction. There is a fraught mother-daughter strand; an imploding relationship breakdown where class and racial conflicts enter the fray – Martha is a tough Jewish uptown girl, Sean is soft-hearted but given to brutal outbursts. Their attractions are also part of their downfall when things don’t go according to plan.

Sarah Snook, Martha’s distant cousin, is hired to fight their case as the lawyer taken on to prosecute midwife Eva. And Martha’s mother, a steely Holocaust survivor, offers invaluable advice to daughters everwhere: “you have to take a stand and tell your truth, otherwise you can never move on”. You might not like her but you’d certainly want her on your side: “and when you do move on, burn your bridges”, is another chestnut.

The actors all do their best to carry the film forward and Ellen Burstyn is the most impressive, Leboeuf stymied by an underwritten role. But the script is so focussed on Martha’s simmering resentment that the final reveal – in a coruscating court scene – bears no relation to what has gone before, leaving us unprepared and perplexed.

The unsuccessful shift from arthouse to Hollywood melodrama could be due to various big names jumping on board the project with their money and therefore demanding a schmaltzy Hollywood happy ending, Martin Scorsese has put his money behind the project as exec producer but Mundruczo’s departure from his arthouse style is a bewildering film, certainly watchable but vaguely unsatisfying. MT