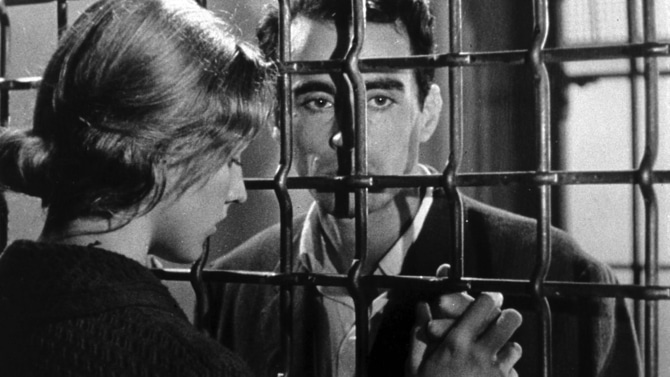 Pickpocket, shot more or less at the same time as Godard’s A bout de souffle in the late summer of 1959, is by far the closest the French director got to the Nouvelle Vague. Even though the Bresson worked on his feature for ten months, Godard had rushed off his script on the first day of a shoot that would go on for between 15 minutes and 12 hours, depending on his ‘inspiration’.

Both directors opt for style over content, filming mostly on location rejecting the idea of film as photographed theatre. In both the main protagonist is a thief called Michel, although only Godard’s antihero commits a murder. Both directors had strained relationships with their lovers going on the run and aspiring to be above trivial everyday life. But here similarities end: Godard’s Michel is very much a personification of the classical film gangster, the script of Godard’s A bout de souffle is far more conventional than Pickpocket, and the denouement could not have been more different.

Michel (LaSalle) falls into petty thieving out of boredom rather than necessity, enjoying the surprise ease of the casual encounters which he goes on to study and perfect. At the Longchamp race track he steals money from a soignée punter and is enraptured by the euphoria this gives: “like I was walking on air with the world at my feet – a few moments later, I was caught”. The inspector (Pelegri) who arrests him (having to let him go through lack of evidence) will play a big part in the petty crim’s life. Michel joins a group of highly skilled pickpockets, working mostly in crowded places (like the Gare du Lyon) and the crime takes on the choreographed nature of ballet dancers at the Comedie Francaise.

Michel leads a sheltered existence until he meets meets Jeanne (Green) who will later fall for his only friend Jacques (Leymarie), a fellow pickpocket. The inspector entraps Michel via his book on the art of thieving – but finds no concrete proof of his activities despite a thorough search of his lodgings. After his mother (Scal) dies, Michel goes to her funeral with Jeanne only to discover the dying woman had made a complaint to the police about stolen money – later withdrawing the allegations realising it must have been her own son. Michel flees the country for Milan and Rome, travelling on to London and frittering away his ill-gotten gains. Returning to Paris he meets Jeanne who has split with Jacques but now has his child. Michel turns to thieving again to support Jeanne and her child, finding a sense of relief in his love for her.

Leonce-Henry Burel shot four of Bresson’s features, and his immaculate black-and-white images are absolutely mesmerising in sequences crisply edited by Raymond Lamy that bring a stylish grace, rather than a sordidness to Michel and his illicit activities. There’s an elegant beauty in the intimate delving of hands into plush leather wallets and crocodile handbags elevating the activity to an art form in its own right and one that somehow negates the nefariousness intent.  Michel slips into crowds and makes his sinuous escape, ducking and diving like an agile beaver. The locations often dwarve the thieves and they go about their business brilliantly in choreographed dovetailing.

Martin LaSalle is hypnotic as a non-pro, originally from Uruguay, he would disappear off to Latin America and a TV career. Bresson did not cast professional actors, preferring to move his protagonists around the set like mannequins. He specifically did not want professional actors with ‘skills’. So in many ways, Pickpocket feels more radical than Godard’s debut feature which seems superficial in comparison. Bresson focuses on Dostoyevsky’s theme of crime and punishment as a metaphor and thus adds another layer of nuanced meaning  (not for the first or last time). Bresson relies on the power of his images, Pickpocket could almost be re-shot as a silent film, the meaning would still be conveyed. A masterpiece.