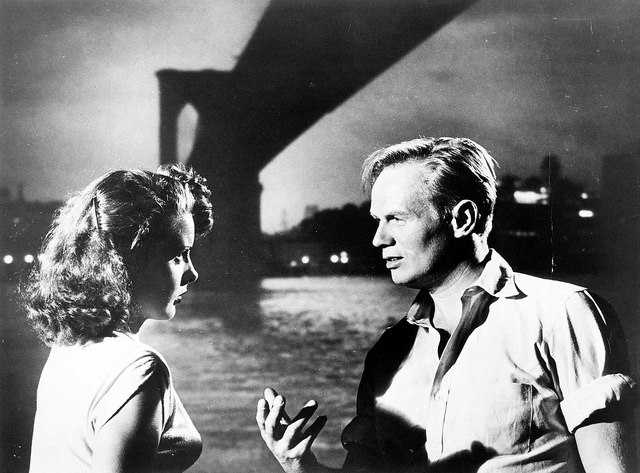 PICKUP ON SOUTH STREET is another classic fifties film noir which gained considerable clout from the director being adamant about the female lead. 20th Century Fox wanted either Marilyn Monroe, Shelley Winters or Ava Gardener for the role of Candy, but director Samuel Fuller not only resisted this trio, on the grounds of them being “too beautiful”, but he also threatened to walk off set if Betty Grable (who wanted a dance number for herself) was cast instead of his choice Jean Peters, whose screen debut was alongside Tyrone Power in Captain from Castile.

In New York, pickpocket Skip McCoy steals a wallet from Candy (Peters) in a subway train. FBI agent Zara (Bouchey) tails Candy but loses Skip. After contacting Police Captain Tiger (Vye), who asks his old informer Moe (Ritter) to identify Skip, she agrees happily. Zare goes on the hunt for the micro film in Candy’s purse which she picked up (unwittingly) from the her ex-boyfriend Joey (Kiley), a communist agent. Candy has fallen in love with Skip, but he has no faith in her. Finally, Skip tracks down Joey and the communist ringleader and a happy ending ensues.

Samuel Fuller was known as a anti communist but Pickup, in spite of its topic, is very ambivalent about taking sides. As often in Fuller’s films, the American bourgeoisie, which had most to gain from the status quo, is ‘saved’ from communism by the down-and-outs of society. Moe, who lives in utter squalor and Candy (an ex-prostitute) are the most violent defenders of the system, Moe does not want to sell her information, after she has learnt that Joey is a communist: “Even in our crummy kind of business, you gotta draw the line somewhere”. Pickup is first and foremost a gangland noir, a milieu which the ex-crime reporter Fuller was well-accustomed to. Fuller might have been an anti-communist but he took very badly to J. Edgar Hoover’s criticism of Pickup – Skip laughs off appeals to help as ‘patriotic eyewash’ and only goes after the communists in revenge for the beating they gave Candy – with producer Daryl F. Zanuck backing Fuller up in a very acrimonious meeting with the FBI boss. Pickup was selected for the 1953 Mostra in Venice, where it won a Bronze Lion, in a year when the jury withhold the Golden Lion for ‘lack of a worthy film’, but compensated with six Silver and four Bronze Lions. AS