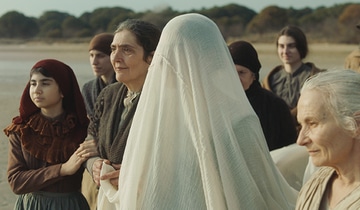 A spiritual journey into the unknown is at the heart of this haunting debut feature from Italy’s Laura Samani whose work explores the mystical connection between faith and womanhood.

Celeste Cescutti is the determined female driving force of this eventful odyssey that starts in a fishing community on the shores of the Adriatic at the turn of the 20th century and culminates in the lofty Dolomite mountains. She is Agata a young woman celebrating the imminent arrival of her first child with special ceremony that takes place on the seashore.

The small body of the title refers to her stillborn child – a baby girl – who is buried by her husband before Agata even has a chance to see or hold her. In the Catholic faith, baptism is only for the living, and the local priest denies the child a Christening, leaving its soul languishing in Limbo. When Agata hears about a holy sanctuary in the mountains where infants can be baptised, she courageously sets off with the body of her daughter to ensure she has a place in Heaven, against the odds.

Essentially a two-hander, Small Body (Piccolo Corpo) is an assured feature debut for Samani whose luminous style echoes the lightness of touch in Corpo Celeste and The Wonders by fellow Italian filmmaker Alice Rohrwacher. The film explores the mystique of religious devotion and its links to folklore and ancient tradition, making use of magic realism in a way that feels tonally convincing transporting the story into the realms of spirituality despite the harsh realities of Agata’s mission in difficult conditions and a hostile terrain.

Rather like Jesus Christ’s journey in the wilderness, Agata’s ‘pilgrimage’ north is hampered by highwaymen, unsavoury characters and adverse weather. She also has to convince her mysterious guide (Quadri) not to abandon her, luring them on with a secret package, and promising to share its precious contents if the mission in successful. Quadri, who has already won awards for a role in Ariana, joins a cast of non-pros as the rather enigmatic wayfarer Agata meets on her journey north. The two rebels bond without altogether trusting one another as they pursue their individual goals. An original score by Frederika Stahl adds a sinister undercurrent to proceedings in this beguiling drama lensed by Slovenian DoP Mitja Ličen whose magnificent landscapes of Venezia Friuli Giulia and the Italian Dolomites create a surreal sense of place. MT