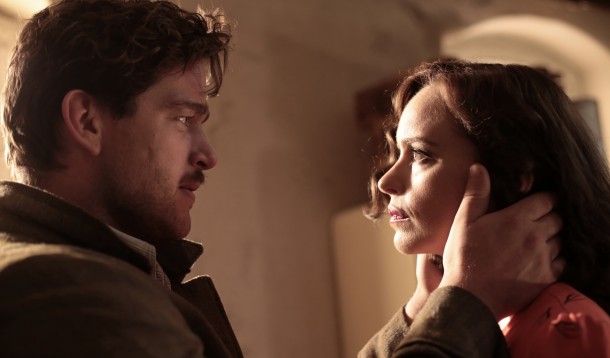 Postwar Berlin is the setting for PHOENIX, a noirish thriller and poignant love story from German auteur, Christian Petzold. Rising from the ashes of a devastated city that has nothing left to offer but memories of the past, it stars Nina Hoss (Barbara) as the soulful heroine in a starkly simple yet moving narrative, where less is very much, more. Her character, Nelly Lenz, displays the human face of wartime destruction, in the literal sense of the word: Nelly, a Jew, has survived Auschwitz, her face shattered beyond recognition but her spirit unbroken, held together by hope, a hope that her husband, Johnny, survived too.

Relying on the talents of his regular collaborators, Nina Hoss and Ronald Zehrfeld, and their earth-shattering chemistry, Petzold strings this smouldering story of desperation and faith towards a harrowing conclusion with co-writer Harun Forocki, cinematographer Hans Fromm and Jerichow production designer K.D. Gruber.

Before the war, we discover that Nelly worked as a nightclub singer, Johnny as pianist. Arriving back in Berlin thanks to her close friend, Lene (Nina Kunzendorf), Nelly is the sole survivor of her family and a large inheritance: enough money to start a new life in Palestine, where many Jews fled after the Balfour Treaty of 1917.  Nelly was, clearly, a beautiful and statuesque woman and the loss of her looks  not only knocks her confidence but robs her of her identity. Plastic surgery will not improve her – she only wants her past back, and her previous life in Berlin. Wrapped in her bandages, Nelly echoes the sinister mother in Veronika Franz’s Goodnight Mummy or even George Franju’s Eyes Without a Face, garnering pity and sympathy for this forlorn image of mental and physical fragility.

In a nearby cabaret (also The Phoenix) Nelly eventually finds Johnny (now Johannes) who is working as a part-time pianist and barman. The twist is that Johnny doesn’t recognise his wife due to her facial damage. But as the narrative develops, Lena reveals a twist in this tale:Johnny isn’t the man she thought he was, although he is the man she loved, and she is still in love.; wanting to melt into his arms, be protected by his strong and healthy physicality. He kisses and smells like Johnny, but he is now Johannes, a brutal stranger, both beckoning and repelling her.

When Johnny sees her, still believing his wife is dead, he seizes the moment in a ugly display of opportunism. Inveigling her into a plan of using her likeness to gain control of her family’s inheritance, he subjects her to a rigorous makeover regime. Nelly welcomes this chance to be with him again: after all she’s becoming herself again, just like the old days. There’s a comfort and an excitement here in this inventive yet devious scenario, tinged progressively with the bittersweet knowledge of what Johnny has done under pressure to survive arrest by the Nazis. Working on several levels, Petzold’s clever narrative also reflects the political deviousness of a nation that has tricked its own people to espouse Nazism and undergo years of hardship in the hope of a better and more prosperous future.

Dramatic tension simmers on a knife edge as these two perform a brilliant and subtle dance of wits and emotions: a tour de force of second-guessing. As Nelly’s physical wounds heal, her emotional wounds go deeper until finally she summons the strength to take back her power and re-emerge from the ashes of her past in the devastating finale.  Nina Hoss singing Kurt Weill’s “Speak Low” is one of the highlights of the festival. There is no youtube trailer; you just have to see it. MT

PHOENIX IS NOW ON GENERAL RELEASE FROM 1 MAY 2015