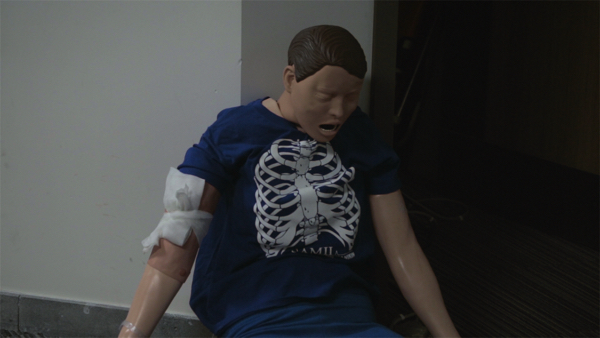 In this unusual documentary, three years in the making, Turkish director Deniz Tortum also acts at his own DoP. It sees him returning to the place he was born, the Hospital Cerahpasa in Istanbul which is now threatened with closure. His father is still working as a doctor and so the film works as a sort of long goodbye.

Phases of Matter is not an easy watch and certainly not for the squeamish. There is enough blood and guts going on to make horror fans happy, although this is clearly a serious and heartfelt paean to medical history. Phases is primarily about everyday life in the hospital, the little events that make everything tikitiboo. It starts with a female doctor prescribing a shedload of drugs for a bed-bound patient, the nurse taking it all down in detailed notes. The medic then reads aloud from a book on the patient’s bedside table – it’s as if it were a love poem. In another ward a group of doctors discusses the use of Excel – not everyone was able to use the spreadsheet for diagnostics back then. Meanwhile next door, a girl has accidentally swallowed a needle and the medical team are examining her – trauma surgery.

The camera remains in the theatre where a middle aged man is undergoing thyroid surgery. The doctors are concerned about the organ weighing in at one kilogram –  a normal thyroid would be just a tenth of this – 100 grms. The surgeon’s knife veers too near the thyroid, a colleague sarcastically uttering “poor patient”, but there is not much empathy to be felt. Surprisingly everyone is smoking, particularly the men. One of the top surgeons complains about his team’s lack of preparation for key-hole surgery: “Have you forgotten everything about the surgery preps, my beauty?”, he berates a nurse. Another snapshot showcasing a lack of political correctness that has become so vital nowadays. But this was back then.

In the corridors of this eminent medical establishment cats sleep lazily on chairs. A man who has given the last six years of his life to working in the morgue claims the pets makes patients feel more comfortable: Life, according to him, can best be described as a journey from the safety of the womb into the threatening world; the joy of living and then the relief of death: no more bills to pay, “no coup, no war, just peace”. The finale sees the hospital closure as a philosophical scenario that plays out in black and white. It ends in the pathology department, where dimming fluorescent light makes for an eerie denouement.

With the use of Sensory Ethnography and other ultra-modern devices from the Istanbul University Faculty of Medicine, Phases perfectly illustrates the chasm between between the instruments of healing and the humans who use them. Medical advances but also social changes – and not always improvements. An innovative and unique poetic essay about healing and the healers themselves. AS