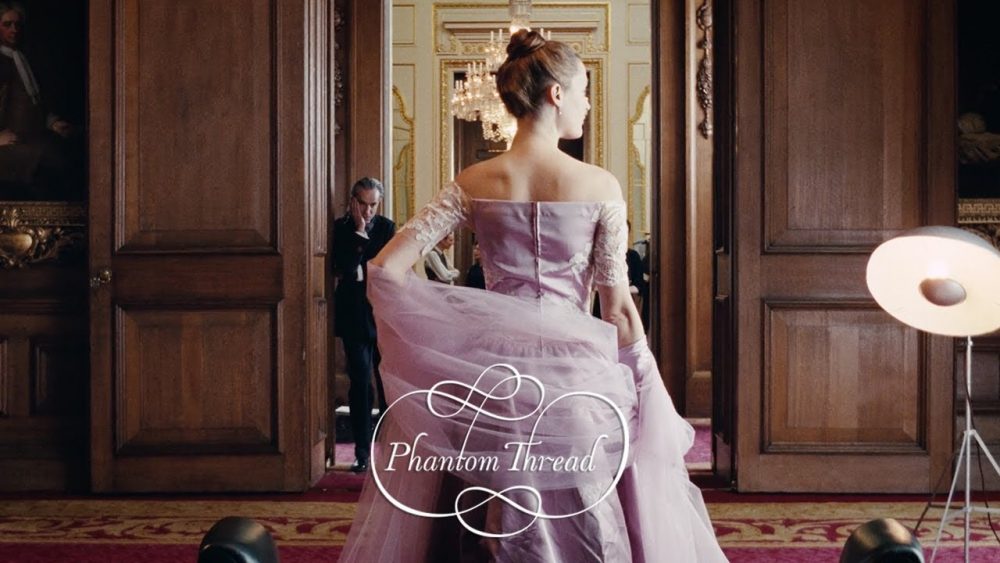 The latest film from Paul Thomas Anderson is quite unlike anything he has done before. PHANTOM THREAD is a deliciously thrilling love story with a slow-burning tight-lipped tension bred partly out of the discrete haute couture world of its gracefully dapper central character Reynolds Woodcock. Played peerlessly by Daniel Day-Lewis in his ‘swan song’, Reynolds is a Hardy Amies-style fashion designer who lives and works in London’s Fitzroy Square where he presides over a celebrated 1950s fashion house specialising in dressing high society and the Royals.

This stylishly buttoned-up affair is all about control, power and prestige in maintaining a veneer of respectability through discipline, dedication and duty that drives Reynolds forward, preventing him from acknowledging the hole in his soul, left by the death of his dear mother, and the absence of true love in his life.  Anderson constructs a world of superlative elegance where the daily round involves the pristine almost priestly preparation of his dress, coiffure, floral arrangements and particularly his breakfast: “I can’t begin my day with a confrontation.” Says Reynolds primly as he goes through the motions of his morning tea ceremony (lapsong, please) and silently buttered toast. “Nothing stodgy”. And no “loud sounds”. His sister Cyril (Lesley Manville at the top of her game), trundles in all red-puckered lips and seamed stockings. She rules the roost with utmost decorum, helping Reynolds as his business advisor and mentor. Reynolds is a disillusioned romantic, a bachelor in his fifties secretly yearning for love, but unable to let it into his tightly-corseted schedule. So his lust for carnal pleasure is channelled into luscious food – runny egg yolks and jugs of cream – until the real thing comes along to unleash his passion in the shape of a scrubbed up waitress named Alma (Luxumbourgeoise actor Vicky Krieps).

In his weekend retreat, he delicately delivers a breakfast order to her: poached eggs, butter, bacon, and jam – but not strawberry, raspberry…and some sausages –  is the verbal equivalent of an orgasm. And beneath Reynolds’ fussy exterior there really does lie a highly sensual man capable – we feel – of giving sexual pleasure to a woman, as well as tailored perfection, and this is the fine line that prevents Day-Lewis’ performance from being too prissy, although it sometimes veers in the direction. Alma is slightly gauche but also sensuous – like a ripe peach that won’t yet yield its stone. And so love gently blossoms in the autumn of Reynolds’ life while storm clouds linger on the horizon.

PHANTOM THREAD feels like a perfect metaphor for the well-known adage: AISLE ALTER HYMN (I’ll alter him, for the uninitiated) and this is just what the innocent-looking Alma has in mind when the two start working together in the West End atelier. This is a drama that sums up the utter dread many men feel about losing control of themselves to a woman. Reynolds will not cede to Alma’s charms and refuses to sacrifice his precious craft by allowing her control of his inner sanctum – the House of Woodcock – which represents his heart and life blood. She remains tough but loving – the perfect replica of his beloved mother, tempting him yet repulsing him by equal measure. Day-Lewis is adamant as the tortured artist, every subtle nuance flickers across his face in a display of mesmerising petulance. It’s impossible not to admire his gentle delivery and his chiselled, tousled allure. As an actor his economy of movement is unparalleled; he possesses the feline grace of Roger Federer and the innate style of breeding of George Sanders. During a delirious night of Alma-induced food-poisoning, Reynolds reveals his deep love attachment to his mother (whose ghost appears to him in her wedding dress)  and somehow her power is magically transferred to Alma, who from then on gets to wear the tailored trousers.

PHANTOM THREAD is Anderson’s eighth feature, and refreshingly is not based on anything but his own inventiveness. It perfectly suits its 1950s setting, an era where England was still on its knees after the war and rationing, and duty and pride in one’s work was paramount – people were so glad to have a job – and this is conveyed by a team of first rate unflappable seamstresses (with names like Biddy and Nana) who understand implicitly when a deadline looms, and a wedding dress must be tweaked or repaired for the following morning at 9am.

There is an erotic charge to PHANTOM that cannot be underestimated despite its immaculate and primped aesthetic. And the acerbically brittle Reynolds is no high-performing borderline psycho. He can transform at the doff of a cap into an amorous and extremely tender lover.  As in “The Master (2012) this is a film about the power and control dynamic between man and woman, and who eventually wins. It moves like the well-oiled engine of Reynolds’ blood red Bristol he drives down country lanes to his retreat. “I think you’re only acting strong,” says Alma, to which he replies, “I am strong.” And the two continue their power play in a way that never resorts to extreme physical or extreme verbal displays, although there is an extremely sinister side to Alma’s methods that make her the perfect antiheroine of the piece, Reynolds, like some overtly powerful  men, emerging the weaker of the two.

Jonny Greenwood’s music is the crowning glory, setting a tuneful rhythm of piano and strings for the soigné scenario that often feels quite claustrophobic, particularly in the final scenes, where we find ourselves shouting: “Don’t!” (you’ll soon see what I mean). At one point Reynolds says: Are you sent here to ruin my evening? And possibly my entire life?” These are the long-held suspicions of the committed bachelor who desperately longs for love, but constantly suspects the worst from his loving mate. Regretfully PHANTOM THREAD is our last chance to see Day-Lewis on the screen. He will be much missed from the films that he has graced. And this is possibly his best. MT

PHANTOM THREAD IS ON Blu-ray