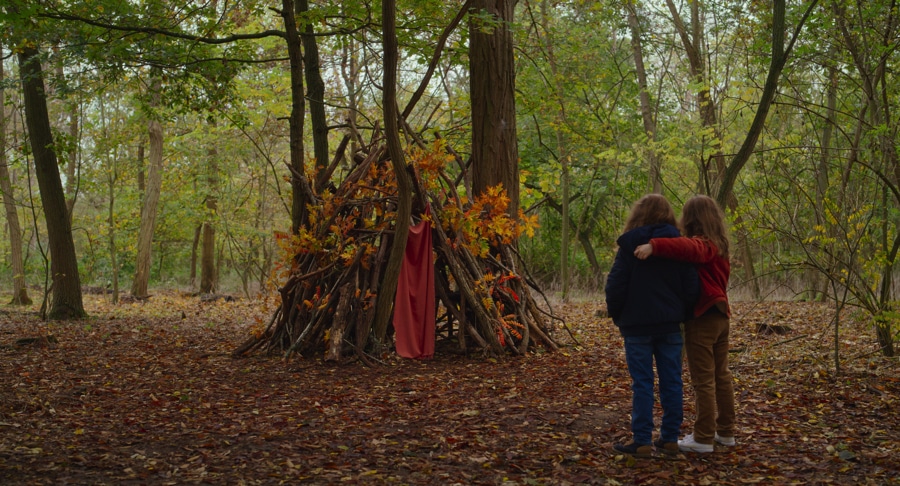 Petite Maman shows France’s Celine Sciamma at the height of her powers with an enchanting ghost story contemplating loss and longing through young eyes.

In competition at this year’s Berlinale, the French auteuse once again evokes the subtle sensibilities of human dynamics through her cast of child performers capturing naiveté but also resilience in the wake of a family bereavement.

The director showed a keen appreciation of childhood dynamics in her 2011 film Tomboy. Here the focus is little Nelly and how she copes in the aftermath of her grandma’s death as the family clears out the home so familiar and comforting in the first years of her life.

Avoiding sentimentality Sciamma maintains a pensive ambiguity for most of this almost spellbound drama that sees solemn 8-year-old Nelly (Josephine Sanz) wondering into the nearby woods where she meets  Marion (played by identical twin sister Gabrielle), the two striking up a tentative friendship as they build a tree house. These two are so po-faced they almost resemble the couple in Kubrick’s The Shining with their chilly demeanour, but we are far removed from any horror story here in a style that is best described at fantastical realism.

Mature beyond her years Nelly views her bereft mother with detatchment although she cares for her in the days after her own mother’s death, doing chores around the house with her father (Varupenne) who she regards with scepticism chiding him over his chain-smoking smoking. Sciamma gradually abandons enigma in the second half but also keeps us guessing as the story gradually unfolds in an eerie and suspended moment in time.

Building a gentle but detached camaraderie throughout the Sanz sisters give captivating debut performances that evoke confidence but also vulnerability. Meurisse is full of sensitivity as Nelly’s mother carrying her grief with a doleful dignity. MT