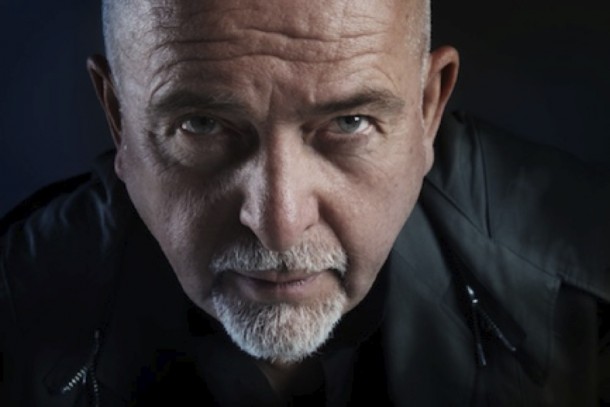 BAFTA winner Hamish Hamilton’s concert film opens with an intimate confession from the Genesis frontman: behind the flamboyant mask, there lurks a timid soul. On stage Gabriel emits a calm magnetism, singing his songs with the ease of a true professional. At 63, he doesn’t particularly ‘wear it well’, by his own admission. Scuttling around like a stout beetle in battledress, he claims to have perfected the art of ‘dad dancing’ even before fatherhood although in the London’s massive 02 Arena, gone are the daredevil stunts of jumping into the crowd. But how can a man with so much musical talent, move with so little rhythm?  Is this all part of his unique brand of idiosyncratic charm as a performer; a way of reaching out to his fans, most of whom are middle-aged (in ‘country casuals’) and have stuck with him from his early days in the art rock band which he left in 1975 to embark on a successful career as an inventive singer-songwriter, visual presenter and humanitarian human being.

His breakthrough album was SO (1986) and spearheaded a future in visual presenting, digital recording and distribution. Strong visuals are the  centrepiece to this BACK TO FRONT World Tour.  Hamilton’s pin-sharp high tech resolution at 4k contrasts with some very low tech filming and a slow pull that takes the image from being out of focus, slowly towards deeper and deeper degrees of resolution and focus.

Joined by a talented selection of session musicians (also in black): drummer Manu Katché; bassist Tony Levin; guitarist David Rhodes and multi-instrumentalist David Sancious. Jenni Abrahamson is the voice of Kate Bush without her lithe, pre-raffaelite lissomeness and there are some giant camera cranes writhing like giant octopuses. In this monochrome affair the only colour comes from guitars gleaming like drops of blood on the stage, backlit by panels of lights; red-bathed for RED RAIN and vibrant primaries for SLEDGEHAMMER and NO SELF CONTROL.  The band run through the entire SO album and include some of Gabriel’s latest numbers (Digging in the Dirt,  The Tower that Ate People). Somehow it all seems so slick and commercial in comparison to the uneasy poetic edginess of the early days. With his fatherly stolidness, the music feels safe and dumbed-down rather than fresh and innovative and the vastness of the O2 drains intimacy from songs such as DON’T GIVE UP, In YOUR EYES and MERCY STREET. Peter Gabriel is an artist and musician who has repackaged himself for the digital age and the 21st century: he knows where his bread is buttered. MT

FILMED LIVE AT THE 02, LONDON ON 21 7 22 OCTOBER 2013 – PETER GABRIEL BACK TO FRONT will be screening at Cineworld, Odeon, Vue, Showcase and other indie cinemas nationwide on 20 March 2014 with further screenings from Sunday 23 March 2014 at selected locations.