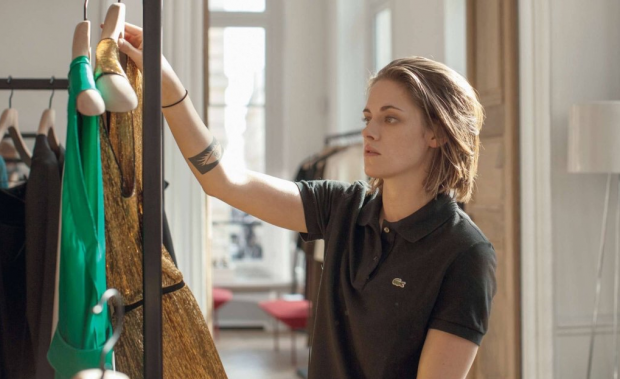 Paris has always had a sinister side inspiring Poe’s Murders in The Rue Morgue and Balzac’s Pere Goriot, a story of social realism set near the Pierre Lachaise Cemetery: French literature is redolent with macabre stories conjured up by the dark side of the capital. So it seems somehow feels fitting that Olivier Assayas should add other chilling chapter to this spectrally charged city with his ghost-themed story PERSONAL SHOPPER.

The film is creepy, charismatic and as quirkily inventive as the director’s typical fare but his first ever ghost story. And Kristen Stewart is the star shimmering in a sombrely subtle turn that is as dark as its subject matter. She plays the unlikely named Maureen Cartwright, a 27 year old American girl who is bored with life and living out a meaningingless few months as a personal shopper to bitchy German media figure Kyra (Nora vonWaltstätten), while mourning the death of her twin brother Lewis.

Paris is the capital of the fashion world and Assayas works this elegantly into the plot as Maureen glides through a series of glitzy ateliers garnering hand-styled garments for her boss along with jewelled accoutrements from Chanel and Cartier. This is a job that fills Maureen with ennui as she considers herself worthy of better things and idly sketches the days away researching a yen for the supernatural and the psychic experiments of Victor Hugo and the avant garde Swedish artist Hilma af Klint.

On the sly, she guiltily slips into Kyra’s couturier gowns and fetishistic footwear before pleasuring herself on Kyra’s bed during her trips abroad. Kristen Stewart brings a gamine insouciant sensuality to her role that feels both menacing and intriguing in its sexual ambivalence.

Maureen is also developing her psychic skills in trying to contact her brother Lewis who died of a congenital heart condition in a dreary nearby fin de siecle mansion where they both grew up. Spending several spooky nights there a ghostly presence is felt as Maureen whispers inaudibly in scenes that are genuinely scary and entirely plausible given the undercurrent of glowering spitefulness that vibes through the increasingly dark narrative. This leads us to believe that Maureen is herself conjuring up the devil’s work. Olivier Assayas’s wickedly inventive vision is one of his most exciting this far. But there’s always 2021 to look forward to. MT