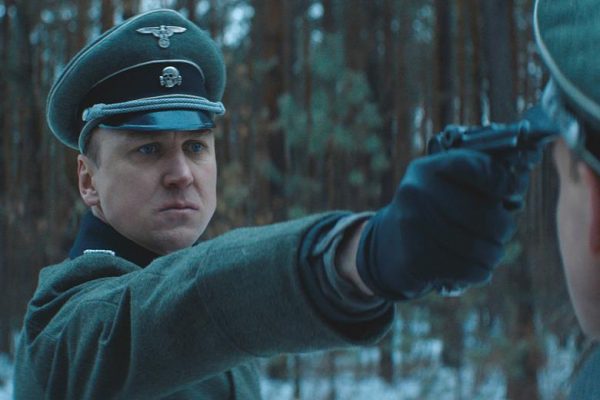 A war of attrition plays out between Belgian Jew and Nazi in this clever and darkly amusing ride to hell and back from Ukrainian born director Vadim Perelman (House of Fog).

Set in occupied France in 1942 and based on a short story by Wolfgang Kohlhaase, a young Belgian prisoner of war is forced to change his nationality and invent an entire language – pretending to being Persian – in order to escape the clutches of an ego-driven commandant who saves him from the firing squad – simply because he has a penchant for learning the lingo (Farsi).

The physical tortures of war are one thing, but the psychological effects can be equally painful, and this film makes a nonsense of the popular saying: “sticks and stones will break my bones, but words will never hurt me”. The young Belgian is played with considerably aplomb by (man of the moment) Nahuel Perez Biscayart. As Reza he not only has to lie but also remember the lies. The payback of these mental gymnastics comes in the film’s stunning reveal that is almost as moving as the final scene in Polanski’s The Pianist.

These were the tortuous hoops that people had to jump through during the Second World War. And Persian Lessons is another astonishing angle on conflict, and another tribute to our collective memory of the Holocaust. Meanwhile the gruelling tension of the folie-a-deux between Commandant and POW is lightened by a deliciously salacious undercurrent of flirtatiousness that burbles away between the Nazi staff running the camp. And although there is a slight longueur towards the final stretch in a story that requires a leap of faith, the strength of the performances and of Ilya Zofin’s brilliant writing combined with the impressive mise en scene blow these minor flaws away.

Reza is an extremely smart young guy and while he quivers in his boots, he also works out how to massage Commandant Koch’s fragile ego. And Lars Eidinger – in one of the best performances of his career – is deeply sinister as the vain and deeply insecure Commandant, who has no access to the internet or even a smart phone to check the Farsi words and phrases, so the plot pivots between his desire to trust Reza and his deep fear of leaving himself exposed to ridicule by his peers and his young teacher, who is living his life on a knife edge.

Elegantly framed and lit by DoP Vladislav Opelyants, the only flaw is the irritating score that incessantly needles away when silence would occasionally be preferable. But even that can’t detract from this really gripping and intelligent wartime thriller. MT

On DIGITAL 22 JANUARY and DVD on 8 FEBRUARY