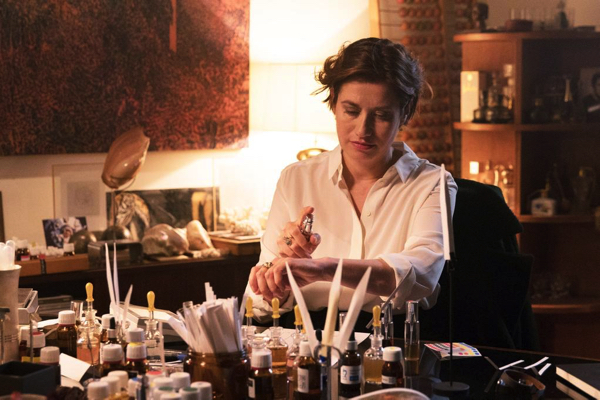 We can always rely on the French to make good-looking and believable middle age love stories, grounded in reality with appealing characters, and style to boot. Their poverty stricken single dads have sex appeal, and the camera loves their selfish divas, especially when have the soigné nonchalance of Emmanuelle Devos who stars here as a once-famous ‘nose’ in the perfume industry.

She plays Anne Walberg in Gregory Magne’s second outing into light-hearted romcom territory. The story kicks off in one of those warm French Octobers where the sun adds a glow of expectancy to this roundabout autumn romance. Anne is kitted out in her chic winter coat and ready to promote the fragrances she creates. Collecting her in a black Mercedes Limo is chauffeur Guillaume Favre, a single dad down on his luck whose dark good looks inject a subtle frisson to their taxi journey.

Still waters run deep, and neither are aware just how much they are going to need each other on this earthy odyssey that goes to unexpected places. Not hot to trot, but certainly persuasive and enjoyable, Perfume’s wayward narrative has a convincing end game. It’s flirty and original just like Anne’s perfumes. MT