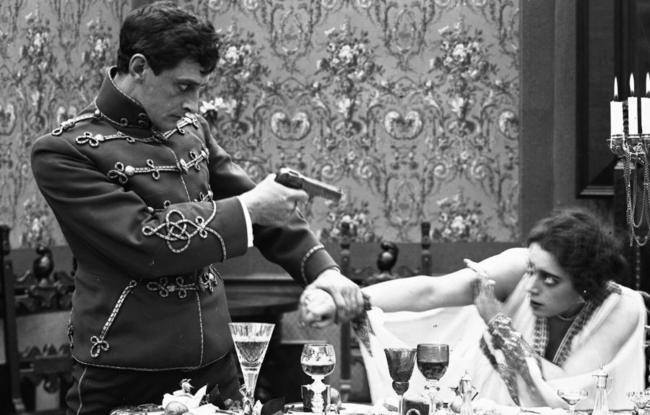 On the morning of 1 July 1890 the acclaimed Polish actress Maria Wisnowska was found shot dead in her Warsaw apartment. Her killer was a Russian hussar seven years her junior named Alexander Barteniew, who pleaded guilty and was sentenced to eight years of hard labour and exile to Siberia. At the old Powazki cemetery in Warsaw a large monument in white marble was erected to Miss Wisnowska, and when Barteniew later returned destitute to the city he would reputedly be seen laying flowers and weeping over her monument before he eventually died in a Warsaw poorhouse in 1932.

The murder – and the revelations about Wisnowska’s love life that emerged during the trial that followed – were later fictionalised by, among others, Ivan Bunin in his 1925 novella The Case of Lieutenant Yelagin, Stanislaw Antoni Wotowski in Maria in the Bonds of a Tragic Love Affair (1928) and by Wladyslaw Terlecki as A Black Romance (1974). Inevitably there was also a film version: Ludzie bez jutra – the title of which translates literally as People With No Tomorrow – subtitled A Tragedy in Five Acts.

The film was directed by Aleksander Hertz (1879-1928), an important figure in Polish silent cinema who has been described as ‘the father of the Polish Film” and whose name appears in reference books and all the histories but whose films – along with Polish silent films in general – are as rare as total eclipses. People With No Future largely dropped out of film history along with most of Hertz’s other films until an incomplete tinted print was discovered in Germany’s Bundesarchiv in 2003; to be unveiled in Warsaw last December and in London, with a live musical accompaniment, at the Regent Street Cinema as part of the Kinoteka Polish Film Festival 2016. 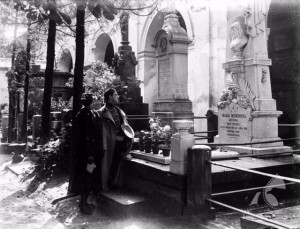 Although completed in 1919, the sensitive subject of a notorious and destructive relationship between a Russian soldier and a famous Polish woman (their two countries were actually at war between February 1919 and March 1921), resulted in two years of censorship delays, including changes to the title (it was also known as At the Time of the Czars and as The Barteniew Affair) and to the names of the central characters. The premiere was postponed twice before it eventually opened in November 1921 when, not surprisingly, it proved popular. The still reproduced here of actors Józef Węgrzyn and Iza Kozlowska as Barteniew and his fiancée contemplating Wisnowska’s monument, is possibly a publicity picture – and certainly didn’t appear in the print shown at Regent Street – but shows that the film was originally overtly about Wisnowska. In the film as it now exists, the two ill-fated leads are now named Lola Wirska and Alfred Runicz, but the film is vague about the period (it seems to be set before the Russian revolution, but a document is seen bearing the date 1919) – and the surviving version screened at Regent Street ends very abruptly!

Viewed after an absence of nearly a hundred years, People With No Tomorrow plays as a plush, very attractively tinted, if rather stilted soap opera in which Halina Bruczówna as diva Lola Wirska sashays through various elegant interiors – and some handsome contemporary Warsaw locations – in a variety of outfits that wouldn’t be out of place in an episode of Dallas. Wicked Lola doesn’t let the fact that she already has a fiancé interfere with her “weakness for jewelry” lavished upon her by the various male admirers in her wake, whose ranks are swelled by the dashingly-uniformed but unstable Alfred, who also has a fiancée. Alfred in this version of events spends a lot of his time kissing the hand of the object of his obsession but seldom seems to get much further, and after he is challenged to a duel by Lola’s indignant fiancé, his descent is swift. The film throws in a female Iago in the form of Helena Sulima as rival diva Helena Horska (probably based on Wisnowska’s real-life rival Jadwiga Czaki) whose intriguing against Wirska includes engineering the compromising letter that seals her doom. RICHARD CHATTEN.