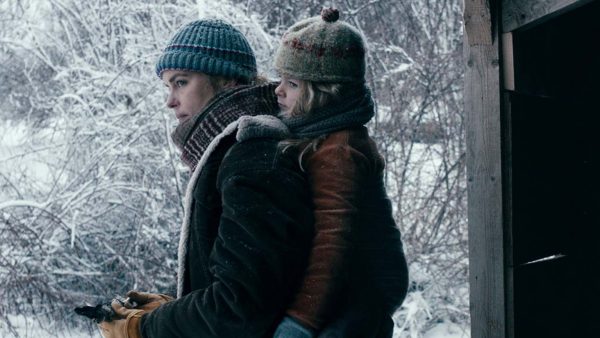 Pester power is the name of the game here and many parents will understand how difficult it is when an existing child desperately wants a sibling?  that with the ultimate damnation of adopting a child who then turns out to be a demon and you have the basic premise of Pelican Blood which opens this year’s Venice Orizzonti sidebar

Riding over glitches in the narrative and bringing a convincing vulnerability to her challenging role is what Nina Hoss does best. And she triumphs here as a fraught single mother doing her utmost not to give up on the vile 9 year old girl she has adopted from Bulgaria, German law not allowing single mothers to go down this route. Hoss just about saves the film as the stoically committed mother Wiebke living with Raya and her cheished child Nicolina (Adelia-Constance Giovanni Ocleppo) in a rural paradise where she works as a horse trainer, enjoying the occasional romantic interludes with her raunchy colleague Benedikt (Murathan Muslu), also a single-parent. But this idyll is short-lived.

Raya’s tantrums soon prove impossible to handle but Wiebke is loathe to give up on the girl who would have to go back to an orphanage and face more trauma for a second time. Gebbe ramps up the unsettling feeling of tension with an ominous soundscape that makes this enigmatic drama chilling to watch. And although Grebbe avoids swerving into lurid horror by keeping the thrilling elements of the drama chilling rather than ludicrous, it is too far-fetched to appeal to strictly arthouse audiences. And the final denouement brings to mind The Omen amongst other features of this popular sub-genre.  MT