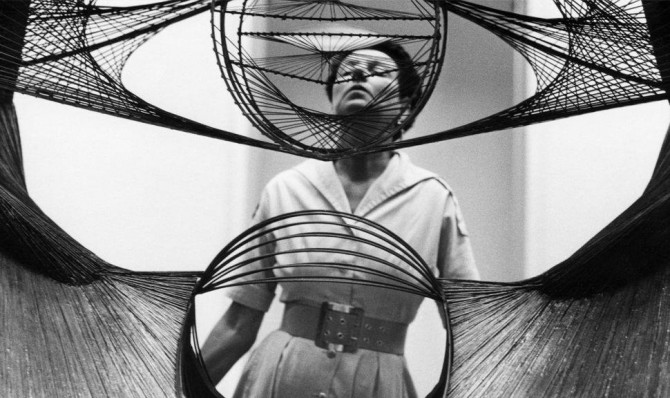 Playing out like a speed date with the most important artists the 20th Century – Vreeland’s doc is packed with juicy secrets and fascinating insight into one of the world most accomplished art patrons: Peggy Guggenheim.

Art lovers and social voyeurs will be thrilled and inspired by this engrossing biopic that reveals Peggy Guggenheim as an enthusiastic and appealing maverick who used her meagre fortune to amass one of the most eclectic art collections ever –  Peggy Guggenheim — Art Addict, follows the bumper crop of remarkable documentaries – along with The Best of Enemies, Listen to Me Marlon, Janis Little Girl Blue and Hitchcock/Truffaut making 2015 an epic year for American documentaries.

It’s hard to imagine a life more interesting than Peggy Guggenheim’s: born in 1897 to a fabled Jewish dynasty who had immigrated to the USA from Europe and were all “off their rockers”; her mother had a wealthy banking background and her beloved father drowned on The Titanic leaving Peggy somewhat compromised financially and socially in her peer group. Paddling her own canoe, she became a trend-setting “lone wolf” (her words) with a keen eye for a bargain and a gargantuan sexual appetite that was only matched by her addiction for acquiring edgy art.

Vreeland’s film is stuffed with facts and fascinating footage but never feels didactic or ‘learned”. Expertly collated and gripping from start to finnish, it whizzes through Peggy’s eventful life during one of the most pivotal eras of the 20th century, making a natural companion piece to her 2011 debut doc: The Eye Has to Travel that tackled her own aunt, the socialite, Diana Freeland.

Here Freeland shares what is purportedly the last interview with Peggy Guggenheim, recorded before her death in 1979. And what makes this special is the audio footage that accompanies the photos and video clips that give a real sense of Peggy’s personality and the people she met and engaged with; often intimately. Interviews with present-day art world personalities and professionals flesh out the exploration to provide a three dimensional experience that transports us back to the 20th century world of modern art. The suave art historian Sir John Richardson dishes the dirt. Curator Hans-Ulrich Obrist and dealer Larry Gagosian also share their views; Marina Abramovic opines on the merits of patrons versus collectors; and Robert De Niro waxes lyrical on his parents who were both artists – and rather good ones at that – and showed their work courtesy of Peggy. Her other claim to fame was the nurturing and patronship of Jackson Pollock, whom she “discovered” and supported for many years.

Vreeland divides her straightforward linear format into four main sections: growing up in New York’s rarefied circles; to Paris, where she met and slept with as many artists as she could, settling in London where she had two kids Sinbad and opened the Guggenheim Jeune gallery with the artistic mentoring of Marcel Duchamp; back to Paris where she turned her hand to collecting “Degenerate Art” before Hitler denounced it; an unfaithful marriage to Max Ernst, who “didn’t give a damn for her”; and back to New York, where she set up the Art of This Century Gallery and became closer to her wealthy uncle Solomon who was responsible for New York’s famous Guggenheim Museum. Her dotage was spent in Venice amongst dogs, lovers and more artists: Vreeland captures the essence of Peggy and enthralls us in the process. MT

DVD and VOD on 22 February 2016 courtesy of Dogwoof