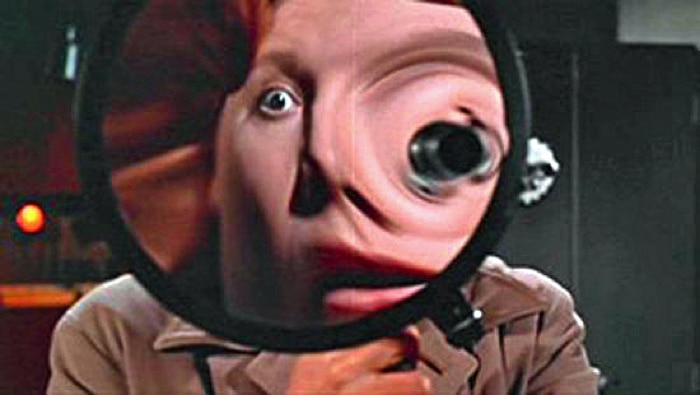 Raymond Durgnat later observed that this glossy colour thriller made Free Cinema’s brand of realism look like “expurgated Enid Blyton”. It’s casual acceptance of prostitution and pornography as parts of everyday life (not to mention that we hear someone else’s bath running in the background in one sequence) must have made it an uncomfortable experience for the few people in 1960 who saw it; as it remains today. Hopefully it didn’t reach Manchester, where it would have given Ian Brady ideas.

Based on a story by London-born writer and actor Leo Marks, Peeping Tom centres on a filmmaker and serial killer (Karlheinz Bohm) who records his victims’ dying expressions of terror on a movie camera. Unaware of their content, his neighbour Helen (Massey) becomes fascinated by these documentaries and secretly decides to watch them.

The stunning opening sequence with Brenda Bruce is described by David Pirie in ‘A Heritage of Horror’ as “one of the few genuinely Brechtian moments in the history of the cinema. Every component – the reduced frame, the clicking of the camera motor, the whirr of the tape recorder (sic) and the clumsiness of the camera technique – is designed to enforce our awareness that we are watching a film.” But am I the only person in sixty years to have noticed that we also see the shadow pass over Ms Bruce of what is obviously TWO people, one with the camera mounted on their shoulder (not hidden under their duffle coat as per the plot)? This moment is seen twice since it’s repeated when we then see the film projected. Every time I see the film I hope this goof won’t still be there; but it always is. Richard Chatten.