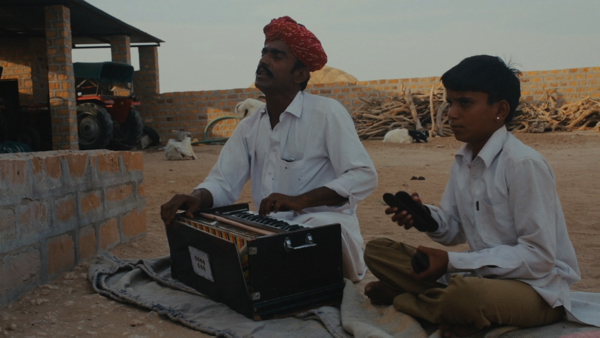 A young Indian boy from the lower caste Muslim Manganiyars is forced to sing traditional songs in celebration of his masters in this simple but enchanting ethnographical documentary from sophomore filmmaker Pushpendra Singh (The Shepherdess and the Seven Songs).

The Thar Desert is vast region to the North of the Indian subcontinent, a natural barrier between Rajasthan and Pakistan’s Sindhi province which forms a vibrant natural backcloth to this fascinating coming of age story of oral history driven forward by its haunting ballads that tell of love, life and hardship (“Oh opium, you made me sell my jewellery”). The Manganiyars Muslims are a people well-known for their folk music which is handed down through the generations and supported by wealthy local Rajput benefactors (jajmans) in caravan towns. Although traditionally Muslims, these troubadour singers often tour around to perform during Hindu festivals invoking the Hindu God Krishna at ceremonies for birth, death and marriage.

Singh follows a straightforward narrative structure interweaving her film with delightful hand-drawn inter-titles that explain the origins and activities of these ancient people who also play instruments such as the bowed Kamaicha; a hand drum or Dholak, and a Khartaal or type of Indian castenet. The instruments are described in the film’s second act which also introduces dancing that feels dervish-like in style. The final act sees Moti leaving his village and travelling to make a studio recording for an Australian radio programme covering a music festival. He has finally found a ‘stardom’ of sorts in these celebrity-driven days.

The crux of narrative surrounds the Manganiyars status as ‘beggars’ a title that sits badly in today’s climate and humiliates young Moti, the central character, despite the pride he feels in his singing and in his cultural traditions. But there is no bitterness here as the Manganiyars feel a natural compulsiveness to sing and can use their vocal skills and treasured heritage to earn decent money and support their families. Singh works with DoP Ravi Kiran Ayyagari to create a vivid and lyrical cinematic gem that is informative, enjoyable to watch and beautiful to look at, its nighttime scenes in the desert are particularly alluring. MT