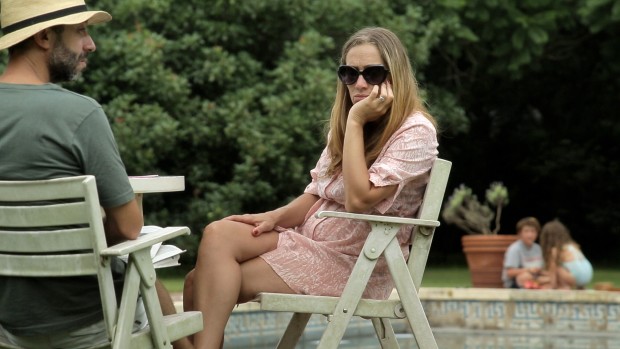 Eugenio Canevari creates an atmospheric mood piece that transcends the well-worn indie film theme of domestic service in South America’s contemporary affluent homes. In her screen debut, Denise Labatte plays the young maid of the title who is forced into an abortion by her callous ex-boyfriend Berna (Bernardo Calabia). As ever, in this Catholic household, the matriarch holds sway and Estefi (Estefania Blaiotta) focuses on herself than her three children and cleaner, refusing to offer any help.

Lounging poolside in a lush suburb of Buenos Aires, enjoying al fresco meals and managing their extensive estancias, Estefi is emblematic of today’s well-healed South American housewife whether in Argentina, Brazil, Uruguay or Chile. Canevari allows his audience to engage and be present in his drama that relies on an impressionist style of exchanged glances, palpable atmosphere and pregnant pauses to convey and carry the narrative, rather than extensive dialogue, making this an enjoyable and easy-going film for cineastes and the arthouse crowd to enjoy, whatever language they speak. Canivari’s film epitomises the over-used but effective phrase: ‘less is more’ and Matias Castillo’s glorious visuals make great use of the sunny and verdant setting both around the house in Buenos Aires and further afield in the Pampas. Canevari disregards running time – just 64 minutes: He tells his story and doesn’t try to add unnecessary embellishment, showing a masterful confidence in both material and execution and making him a talent worth watching in the future.  Recommended.