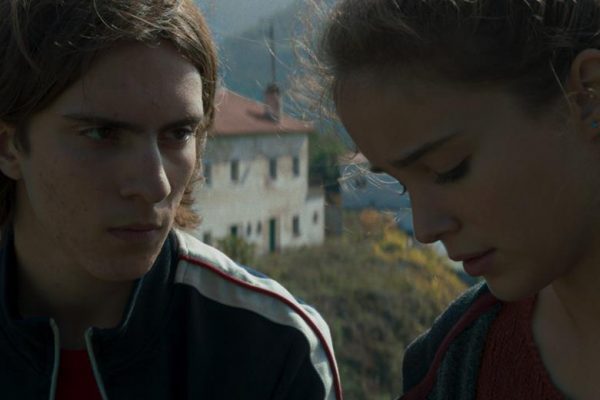 Who would have thought the name ‘Patrick’ would be the title of two features this summer? The first was Belgian director Tim Mielants’ offbeat comedy that premiered in competition at Karlovy Vary. The second is this enigmatic post abduction story that fails to catch fire despite its visual allure and edgy atmosphere. Waddington’s enigmatic approach leads to a drama that drifts around uncomfortably but is easy on the eye.

Patrick works on a similar premise to The Imposter without the same gripping storyline. Waddington establishes young Patrick’s hedonistic lifestyle in the fleeting opening scenes: sullen and rather keen on himself, the 20-year old Belgian native (played by a terrifying Hugo Fernandez) is living in Paris where he takes good care of his body, despite suffering disfiguring acne. He is a violent and abusive misogynist – we see him in a nightclub asking a woman her age before moving swiftly on. Although he appears to be emotionally in control, a telephone call reveals the reverse. He shares a swanky apartment with another man who is not his boyfriend despite their physical closeness.

These frenetic opening scenes soon give way to a calmly observational second act where Patrick is being interviewed by police after a drug-fuelled incident at a party where he has apparently supplied the narcotics. It emerges that he is also running a porn site, abusing underage girls, and is in fact called Mario: Twelve years earlier he was the victim of an abduction from his home in the Portuguese countryside. The shock seems to have affected his ability to speak the language. And when Mario goes home to his mother, the film takes on an enervating stillness that seems to suit the narrative torpor, but fails to clarify the past.

His earthy mother Laura (Teresa Sobral) makes no real attempt to confront his about his crime; his kindly aunt Helena (Carla Maciel) and 17 year-old cousin Marta (Alba Bapista) just treat him as part of the woodwork – or the tile-work – it’s Portugal, after all. His violent past now seems forgotten in this placid rural idyll, as the women gently surround him with their feminine energy and peacefulness, hoping that Mario can heal if things go back to normal. He is left to go off into the  countryside with his cousin, who talks about her life in Brazil, amid a beguiling ambient score. They swim in a limpid lake and Mario cuddles an endearing baby fawn, with the haunting words “this is our dinner”. He later lashes out at Marta, while talking about a man who used to hang around during sports training, and insisted on calling him ‘Patrick’. But there is no explanation as to why his anger is exclusively directed towards women His father eventually makes an appearance (a fabulously moody Adriano Carvahlo) mumbling about having to go away again. His parents seem decent and loving, despite his father’s frequent absence.

So was ‘nature or nurture’ Waddington’s angle on Mario/Patrick’s violent condition? Seemingly the former, but we have to wait until the final scenes, by which time we really cease to care about this hostile narcissist. His abduction clearly unleashed a vicious anger that could have been a bi-product of depression due to his being abused. The finale sees him driving off into the city again where he finally gets his revenge. MT