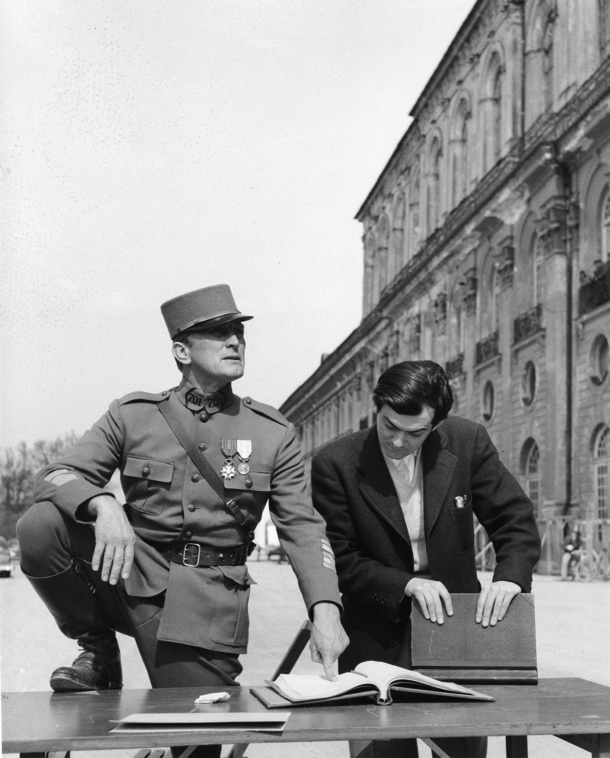 PATHS OF GLORY was Kubrick’s first foray into the battlefield, based on the true story of French soldiers refusing to obey orders. Anti-war films often fall into the trap of somehow glorying the war action and showing the heroism of the soldiers. But there is nothing heroic about Kubrick’s men in the trenches: in all their human frailty, they are afraid of pain rather than death. The film opens in half darkness and eerie silence, a mixture of fog and smoke, the black and white images forging together in chiaroscuro perfection, each frame painstakingly composed. A long and haunting tracking shot meanders through a trench in the run-up to battle, witnessing the terror etched on soldiers’ faces as they prepare for the onslaught. In contrast, the generals meet in elegant drawing rooms, full of antique furniture and the opulent ballroom scenes anticipating the ones in Visconti’s Il Gattopardo.

Kubrick’s narrative is set during the third year of WWI. The French General Broulard (Adolphe Menjou) hints to his subordinate, General Mireau (George Macready), that he might become a three-star general if he leads a successful attempt to capture a heavily armed German position, called “The Anthill”. Mireau knows that this is a near impossible task, risking the lives of the 8000 men under his command. But he soon convinces himself:  “But, by god, we might just do it!” Colonel Dax (Douglas), having protested against the attack, is leading the action on the battlefield, which turns out to be the disaster he was afraid of.  In the end Mireau even orders his own artillery to shoot on his own men, but his orders are refused. To save his promotion, Mireau finally orders three ordinary soldiers (drawn by lots) to be shot for cowardice, since his plan of attack was “perfect”. Dax defends the three in a military tribunal, but even though more evidence of incompetence of the planning comes to light during the trial, the men are condemned and executed. 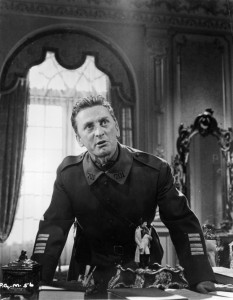 The class structure of society, mirrored in war, is demonstrated by the scene of the three condemned men in the cell awaiting their execution: one complains, that the cockroach will be longer alive than himself, having more contact with his wife and child than himself. His fellow victim-to-be squashes the cockroach with the words: “Now you have the edge on him”.

The camera captures the two-level of this ”upstairs-downstairs” scenario perfectly: the hectic action scenes, and the dolly-shots of the ball scenes only one example of the variety. Douglas is superior as the repressed soldier, who only finds his human identity, after being confronted by his murderous superiors. The final scene of PATHS OF GLORY is as unexpected as brilliant: in a pub, a group of French soldiers are celebrating, when a German girl, a prisoner, is forced onto a make-shift stage to sing “Ein treuer Husar”: the soldiers hum the familiar melody, not knowing the German text. A startling ending to an impressive production, which obliged the French authorities to ban the film until 1975. It was also banned during Franco’s Spanish dictatorship, an embargo which lasted until 1986, ten years after his death. Once again Kubrick’s work was to have profound effects that rippled through the Western World: a fitting tribute to the Great War that changed the World forever. AS

OUT ON RELEASE COURTESY OF EUREKA ON 19SEPTEMBER 2016