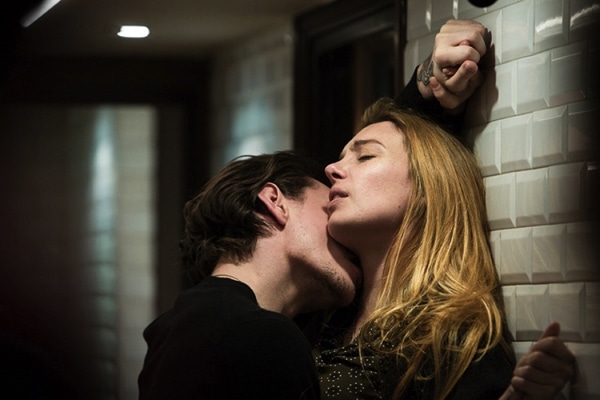 Single mother Helene (a rather ditzy Dosch) lives with her young son in a  large country house financed by alimony from her ex-husband (played in a sneering cameo by Gregoire Colin). We then see her in one of those large university literature theatres her quoting Baudelaire to her students, although Dosch’s Helene doesn’t make for a convincing blue-stocking, wafting around half-naked with a pouting expression verging on tears. We soon discover the reason why. She has fallen for a charmless Russian security guard (played by Sergei Polunin) who is keen on Putin, covered in tattoos – and married, into the bargain. After scenes of rather saucy sex – but somehow devoid of real passion – the two confess their obsession with one another, after which the Russian leaves without so much as a smile.

Helene mopes around in a daze unable to focus on anything. At one point she has an ‘existential’ conversation about female ’empowerment’ with her friend over coffee, but that’s about as meaningful as this story gets. When the Russian suddenly announces his departure back to Moscow, Helene is bereft and consults a shrink (Slimane Dazi) who listens rather too lasciviously to her love confession. She admits to have visited Moscow “for a few hours” hoping to bump into her lover in the snowbound streets “just to breathe the air he breathes”.

Fast forward eights months, and the tone is considerably more positive, and Helene has a spring in her step for reasons that are unclear. When Sergei calls out of the blue one day they agree to meet up again in a finale that is both underwhelming and  inconclusive. The only question that remains: Why was Passion Simple selected for the main competition in a major film festival such as San Sebastian. MTAs