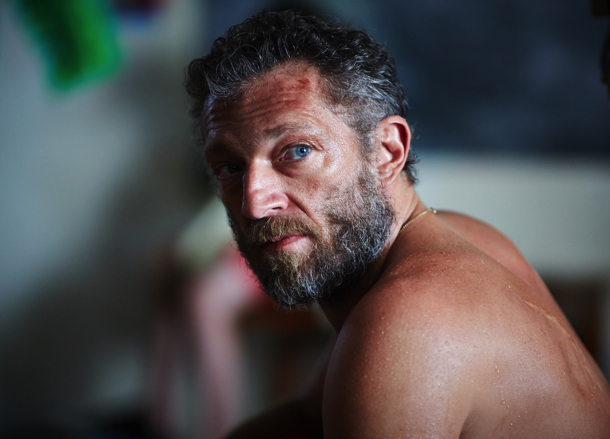 Preening with narcissistic self-righteousness is how Vincent Cassel plays Gregori, the cultish pater familias of a child orphanage somewhere in a hillside town. 30 year-old Ariel Kleiman’s debut feature is an enigmatic thriller inspired by a article on child assassins in Colombia. For a director who has made his name from a string of award-winning shorts, this is a feature film with gravitas and aesthetic style – a kind of stylised realism.

The story unravels from the point of view of young Alexander (Jeremy Chabriel)  who lives with his single mother Susanna (Florence Mezzara) in a subdued compound with eight or so other nubile women and their offspring who appear to be the protegées of the mesmerising Gregori. Cassel makes for a chilling and masterful leader – and although outwardly casting a concerned and kindly eye over his underlings, he is not a character to be crossed or challenged – and this is keenly felt when one of the kids stands up to him, and Gregori reacts with brutal authority. Sending them out on daily errands from their closed community in the rocky hillside, he appears to be fostering a den of iniquity of which he is the supreme leader, servicing his women folk – or so it’s implied.

The children are the focus of this strange story that feels alienating but somehow familiar. Cassel commands absolute authority in a narrative where he himself is morally questionable – a coiled spring waiting to pounce from a position of restrained yet magnetic menace – he gradually exudes antipathy and mistrust. You grow to hate him. It’s a superb portrayal of slow-burning and carefully concealed evil, cleverly directed and tightly scripted by Kleiman and his collaborator Sarah Cyngler. MT

PARTISAN is a metaphor for a kind of smalltime fascist dictatorship with Cassel carrying the film as its repugnant overlord. It’s a shame therefore that the pace is narcoleptic and – in the end – the piece too ambiguous to sustain or satisfy its narrative pretensions. That said, PARTISAN meticulously paints a picture of how easily children can be detrimentally influenced by their carers and the heavy burden of responsibility adults have for the young people in their charge.  MT