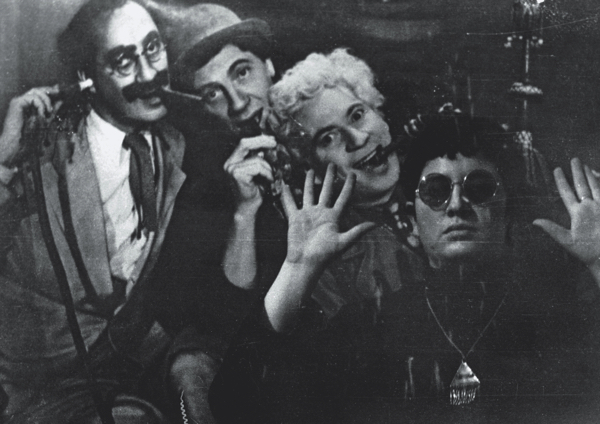 German painter, photographer and filmmaker Ulrike Ottinger (Joan of Arc of Mongolia) a “Berlinale Kamera” in 2020 for her oeuvre. The  biographical documentary Paris Calligrammes is a lively inventory of her artistic roots, starting in 1962 when she left her hometown of Konstanz at the age of 21. In Paris she meets other German artists forced to emigrate due to the Nazi scourge.

Ulrike arrives in the French capital as a hitch-hiker after her car breaks down, Paris in the Sixties providing her with enough creative inspiration to drive her own ambitions. And where better to start an artistic journey than the second-hand bookshop run by Fritz Picard in rue de Dragon in the Sixieme? She helped curate his book collection from street vendors. These were traded along with other works acquired from German emigrants of the 1930s and 40s who had been forced to travel light.

It was here that Ottinger discovered the titular Calligrammes: Poemes de Paix et de la Guerre by Apollinaire. Dada and the surrealist movement were her next discovery, she also met authors and artists including Anne Kolb; Hans Arps; Erich Jünger and Franz Jung – all of them had been forced to leave Germany, for their part in the Weimarer Avantgarde. The filmmaker Hans Richter and the writer Walter Mehring were also  acquaintances, the latter bemoaning the death in exile of Ernst Toller, Kurt Tucholsky, Joseph Roth, Ernst Weiss, Walter Hasenclever and Carl Einstein, whose books were still sold by Picard.

Back in Konstanz, Ottinger’s paintings were gaining repute. Meanwhile in Paris, in the atelier of Johnny Friedländer, she mastered the art of eau-forte, aquatint and etchings. Living in a small unheated attic in Saint German des Pres, she joined more famous artists: Simone Signoret, Sartre and Simone de Beauvoir. They worked in well-heated cafes, where a cup of coffee was enough to buy a place for a whole day. She also met Jean Rouch who was shooting Chronology of a Summer. On the streets Ottinger talked to the “Universal genius” Raymond Duncan, who wandered around in his toga telling everyone to “make everything you need, yourself.” She also visited the “temple of books” La Hune.

But it wasn’t all rosy. Back in Konstanz she had met some French soldiers who had deserted the army so as not to serve in Algeria. She had stolen a suit from her father and given it to one of the deserters. On the night of the 17th October1961 the Parisian police, under the control of Maurice Papin (who had led the deportations of Jews to the death camps) butcher over three hundred Algerians near the Grand Rex Cinema. The government stopped the news reaching the headlines, even opposition newspapers failed to report the killings.

Jean Genet brought the carnage to life in his 1964 play The Screens. It was finally allowed staged in 1966, directed by Jean-Louis Barrault. By this time, Ottinger had moved to the Latin Quarter, near the many art-house cinemas, and Pop Art was now her thing, making Comic strip paintings in 3D. She also visited the American galleries showing Warhol, Rauschenbach and Wesselmann. But all the time she was confronted with the history of her homeland, bumping into the painter Lou-Albert-Lasard, whose pictorial tribute of the Gurs camp reminded her of her own internment past.

Ottinger did not overlook the bloody French colonial history, visits to the Musee Colonies or the Jardin Colonial were a sight for sore eyes. With Jean Rouch she toured the Musee d’ Homme, while he was preparing his films on ethnographic developments. Ottinger found a home, at least three times a week, in the Cinematheque Francaise, which had just moved to the Palais de Chaillot under its director Henri Langlois. Opened by Pompidou and Malraux, the new home had a film museum where Langlois showed off the Mummy from Psycho, donated by Hitchcock. But the German connections always re-surfaced: well known Berlin film critic Lotte Eisner talked about the founding of the Cinematheque, when Langlois was young and slim. Finally, Ottinger reports from her visit to a Goya exhibition which inspired her feature film Freak Orlando.

An extensive and exhaustive documentary about the artist as a young woman – always haunted by the Germany of her childhood. The theme of displacement would continue to feature in many of her films. AS

PARIS CALLIGRAMMES will open on 27 August 2021at Bertha DocHouse, Ciné Lumière, ICA Cinema and JW3 in London and at independent cinemas throughout the UK and Ireland.

PARIS CALLIGRAMMES celebrated its world premiere at the 70th Berlin International Film Festival. where the director was awarded the Berlinale Camera by the festival.
Copyright © 2022 Filmuforia