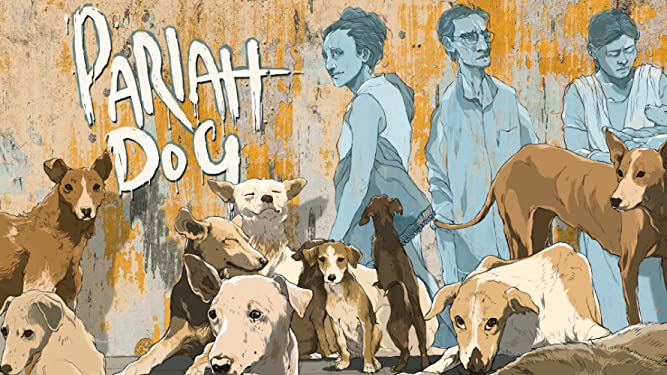 This homage to the stray dogs of Kolkata is the first feature documentary from US Canadian director Jesse Alk. The decaying glory of the former capital of the Raj provides an evocative setting for his labour of love, and  possibly the saddest film of the year. Alk (whose father Howard, directed The Murder of Fred Hampton 1971) influenced by Charles Baudelaire’s ‘Paris Spleen’ a hymn to the street dogs of Paris, who inspired his poetry.

The Indian Pariah dog, aka South Asian Pye dog, has been forced out of its native habitat leaving nowhere left to go in the squalid backwaters of grandiose post-colonial decay: shoeless children play on a riverbank, a man urinates against a wall while a little girl disco dances, oblivious. Shot on the hazy waterways of the coastal delta or at night under velvety street lights where goats are herded through waterfronts and slums, Uber-Drivers dart like ghosts from another cosmos.

But Pariah Dog is more about the four souls who help strays survive. It’s a symbiotic relationship, the dogs are their raison d’etre and their extended family. Artist Pinku tools wooden sculptures by day and drives a taxi at night to pay the bills. A gentle, philosophical man he lives for his menagerie of dogs, a parrot, a rabbit and a monkey, all sharing a decrepit hovel not big enough to swing a cat. Meanwhile Subrata is possibly the first yodelling rickshaw driver. His efforts to raise money with his dog-themed songs are laudable and touching, but his pleas for animal welfare donations fall on deaf ears, so he resorts to street leftovers to feed his grateful pack of hounds. In 2013 he took part in a Bengali TV show, fading posters the proud testament to his moment of glory. Later in the film he transforms into a canine troubadour encouraging others to care for “humans, animals and plants”.

Two women make up the foursome: Milly and her helper Kajal come from different castes of Hindu society, often falling out over their rules of engagement. Millly is a highly educated disillusioned romantic whose husband left her in her decrepit family pile. Of Japanese-Russian descent, she pleads poverty: her land has been taken over by squatters but the authorities couldn’t care less. Kajal lives nearby in a hut the size of a kennel. Devoted to her strays, maimed by passing cars or unkind people, she cares for them until they die, burying them with a yellow garland, a sign of Hindu respect. A supreme love for life and the vulnerable has struck a chord with their feelings of dispossession, carrying these desperate women through ructions and reconciliations, their dignified street marches to raise awareness of animal welfare are to be admired.

For dog lovers, some of the footage is too difficult to watch. Alk conjures up enough poetry in his images without resorting to sentimentality, maintaining a dispassionate eye in this cruel metropolis of 15 million where only the fittest survive. In this ‘Black Hole of Calcutta’ the spirit of Mother Theresa still survives.

AVAILABLE TO VIEW ON TRUESTORY