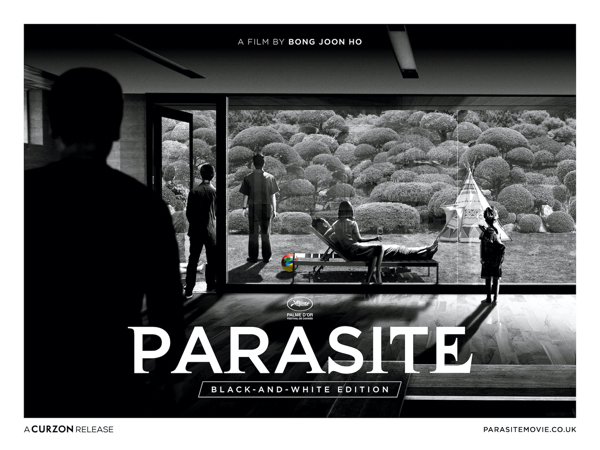 The black and white cut of this wickedly thrilling upstairs downstairs social satire Korean-style seems even more resonant, relevant and appealing in its monochrome format.

This scabrous story is the latest in a line of hits from the South Korean master along with The Host, Snowpiercer and Okja. But this time the gloves are off as Boon Joon offers up shameless social reality and makes no bones it, dishing the dirt on the rigid class system in his homeland.

Thematically rather too similar to last year’s Plane d’Or winner Shopkeepers to offer any big surprises about South Korean life, this is nonetheless startling in its candour. The characters are ordinary people making their way as best they can. But this is a flashier film that wears its satire on its slick sleeve for all to access, and there’s nothing subtle about its social message. The ‘parasites’ are sharp individuals who cunningly see their way to the main chance. Bong Joon calls the film “a comedy without clowns, a tragedy without villains.” Yet in the natural world, parasites live off their hosts, depending on them for survival, but often causing disease or harm. This certainly was the case in The Servant, but does it happen here?

Head of the family Ki-taek (Song Kang-ho) lives with his wife Chung-sook (Chang Hyae-jin), son Ki-woo (Choi Woo-shik) and daughter Ki-jung (Park So-dam) in a squalid slum, grafting a living by preparing cardboard pizza boxes. Through his backstreet contacts, young Ki-woo inveigles himself into a wealthy household of a captain of industry Mr. Park (Lee Sun-kyun) where he is tasked with tutoring his teenage daughter Da-hye (Jung Ziso). Her mother Yeon-kyo (Cho Yeo-jeong) is a typically vacuous trophy wife who prances around their pristine modernist mansion all day, doing a spot of shopping when she occasionally ventures out with . Without giving any clues away, the Ki-woo’s entire family are drafted into the vast mansion, taking various guises, and booting out the old guard. As the narrative spools out with a series of plot twists, the tension gradually mounts and the gulf between rich and poor is ramped up to the maximum. No one comes out a winner after a lavish garden party where they all take part in some form or another, as blood mingles with the champagne.

Winning the Palme d’Or at Cannes in 2019 and four Academy Awards in 2020, including the Oscar for Best International Feature, this is a confident and entertaining drama that beats as it sweeps, its production values as smooth as silk and laced with a dread-laden score. The kids give as good as the adults performance-wise and leave us pondering which is best: North Korea with its oppressively restrictive communist regime or the South with its dog eat dog capitalism based on the law of the jungle? MT