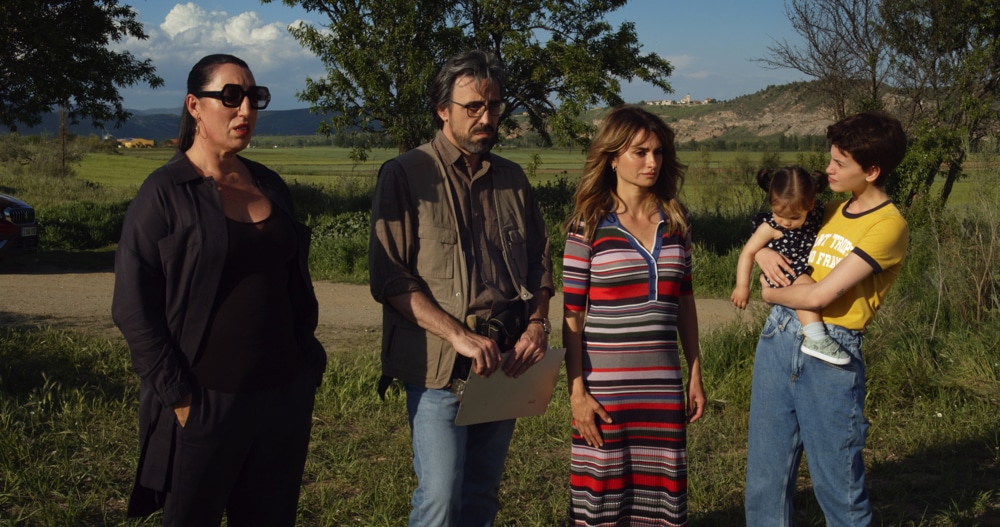 This so-called women-centric drama from writer director Pedro Almodóvar promises more than it delivers –  many of the Spanish director’s features it peters out into a soppy soap-opera, overstaying its welcome like an overdue baby after a self-indulgent running time of over two hours.

Janis (Cruz) a fortyish fashion photographer meets teenage run-away Ana (Smit) in the maternity ward, both giving birth at the same day. They are going it alone: Janis’ love-interest Arturo (Elejalde) wants to say with his wife who is undergoing chemotherapy, and Ana has been blackmailed by two men into having intercourse. The baby mix-up is telegraphed, and Ana loses ‘her’ child to cot death. Meanwhile Janis has confirmed her suspicion regarding the baby’s identities, having done maternity tests on the sly. Janis then gets Ana involved as a babysitter: she jumps at the opportunity to escape her overbearing actor mother Teresa (Sánchez-Gijón) and emotionally distant father – and is only too ready to accept Janis as a replacement mother. But will Janis spill he beans? And will Arturo, a forensic archaeologist, leave his wife after her recovery?

In the lush interiors Penélope Cruz takes centre stage, dominating the cast, particularly Smit, who is the sacrificial lamb. Almodóvar even finds time for a political lecture with Arturo leading an excavation of a mass grave of victims of the Spanish Falange of the Spanish Civil War, among them members of Janis’ family. DoP JoséLuis Alcaine conjures up decorus images on the widescreen but fails on the close-ups which somehow come across as wooden and artificial.

Parallel Mothers is on par in the context of Almodóvar’s prolific output a minor work – a showcase of everything he is good at – but falls between entertainment and serious satire, leaving the audience disappointed on all accounts. AS