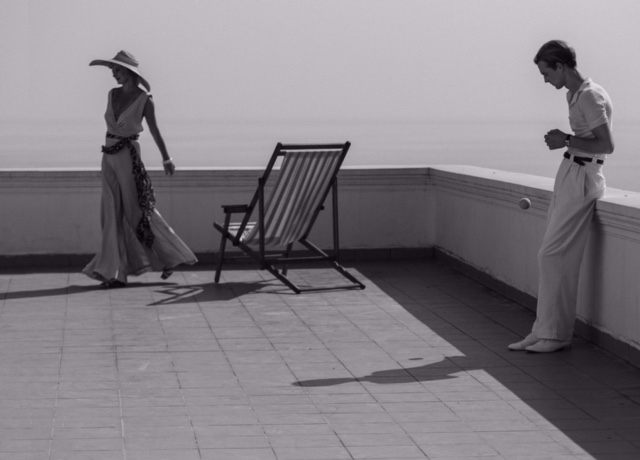 Russian veteran Andrei Konchalovsky has been making films for fifty years and bringing them to Venice where he first won the Volpi Cup in 1966 with his debut Pervvy Uchitel. His élatest Golden Lion hopeful PARADISE interweaves three tragic lives during the Second World War – Olga, a Russian countess and member of the French Resistance; Jules, a French collaborator; and Helmut, an aristocratic German SS officer.

PARADISE is a dense and romantically complex piece that provides an intense experience for those who have the stamina for its complicated episodic structure, despite superb performances and outstanding cinematography from Russian DoP and regular collaborator Alexander Simonov (Postman’s White Nights) who also worked with the sadly missed Alexei Balabanov (Brat, Cargo 200). The velvety black and white visuals and combination of 35mm and 16mm perfectly conjure up the war years from 1942-44 and there is sumptuous and intimate attention to detail and lighting throughout the film’s graceful interiors and more grisly scenes in claustrophobic concentration camps evoke a keen sense of confinement. The only scene where freedom is felt is in flashback to the pre-war years where Olga and Helmut frolic on a rooftop (main picture).

Olga is played by the sinuously elegant Russian actress Julia Vysotskay who we first meet after her imprisonment for having taken two Jewish children under her wing in occupied Paris. In the offices of genial police interrogator Jules (Christian Duquesne) she is écross-examined and deftly turns the table on him by seductively opening her legs. In exchange for a Grand Cru classé (1919) she agrees to meet him the following day. But the rendezvous is never to be as Jules is later assassinated while in the woods with his son Emile.

Olga is then sent to a concentration camp but again siezes her chance for freedom when the camp’s rambunctious chargé d’affaires is caught for cooking the books, by Olga’s willowly ex-lover Helmut (Christian Clauss) who hires her as his very personal maid, and as the Nazi’s luck runs out the pair plot their escape via Switzerland until tragedy intervenes.

Scripted by Konchalovsky and Elena Kiseleva, the story unspools via sketchy face-on interviews with Jules, Olga and Helmut dressed in prison garb. These are interlaced with the action scenes and where the film requires intense concentration, making it difficult to engage with the characters and their story. Viktor Sukhorukov’s cameo as Heinrich Himmler is a fascinating interlude but is voiced by another actor in Russian and German, with some technical glitches.

And so PARADISE – an attempt by the Nazis to create a perfect Aerian world – becomes Paradise Lost. Despite the rather complicated mise-en-scene this is nevertheless an achingly beautiful and resonating picture of wartime from one of Russia’s most outstanding filmmakers. MT