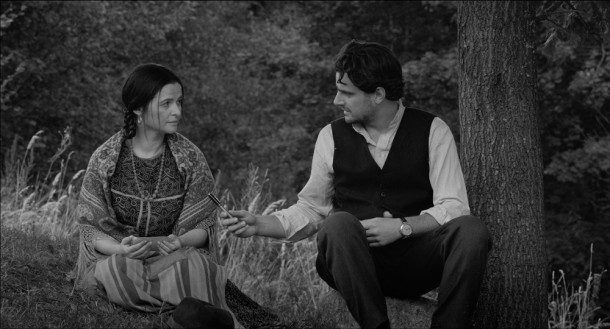 Though ostensibly a biopic of the Polish-Romani poet and singer Bronisława Wajs (aka the eponymous Papusza), Joanna Kos and Krzysztof Krauze’s Papusza seems to concern itself just as much with the life and history of the Romani people in 20th Century Poland as it does with Papusza herself. In telling Papusza’s story, the film jumps back and forth over a sprawling timeline, encompassing both World Wars and, perhaps equally significantly for the Romani community, a government decree aiming to end their nomadic roaming. This, then, is as much a story about the effect of external politics upon a community as it is a story about one woman’s struggle with the ideological confines of that same community.

In a sense, though, it’s also external politics that exacerbate Papusza’s situation. On the run and in hiding in the post-war years, poet and ex-resistance fighter Jerzy Ficowski takes refuge with the Romani, entering a world where people believe in spells and justify stealing animals by claiming that they are God given and owned by all. Here, he meets Papusza who, unusually for a Romani, has learnt to read – much to the disgust of her fellow travellers. At one point, when Papusza is still just a girl, the Romani camp is attacked and burnt. Papusza believes the attack to be her fault, simply because she has learnt to read. It’s perhaps no surprise, then, that Papusza is hesitant about her literary gifts – gifts noticed and encouraged by Ficowski, who will later translate and publish Papusza’s poems in Polish newspapers, bringing Papusza both wider fame and banishment from the Romani world. She is accused of betraying their honour and their secrets, and therefore of breaking the rules of their insular community.

When Papusza states that she would have been happy if she hadn’t learn to read, it’s hard not to read in wider issues of social and sexual politics, both within and beyond the Romani community – and yet, the continual focus on the community at large prevents Papusza from becoming a ‘woman’s film’, or from ever giving us a central protagonist with which to truly identify. As a whole, the film may be very well made and strikingly shot, but it’s also long and a little too leisurely, given the lack of tight engagement. Still, as a detailed portrait of an outsider community, the film leaves a textured imprint which won’t be soon forgotten.  Alex Barrett

PAPUSZA IS ON GENERAL RELEASE AT SELECTED VENUES