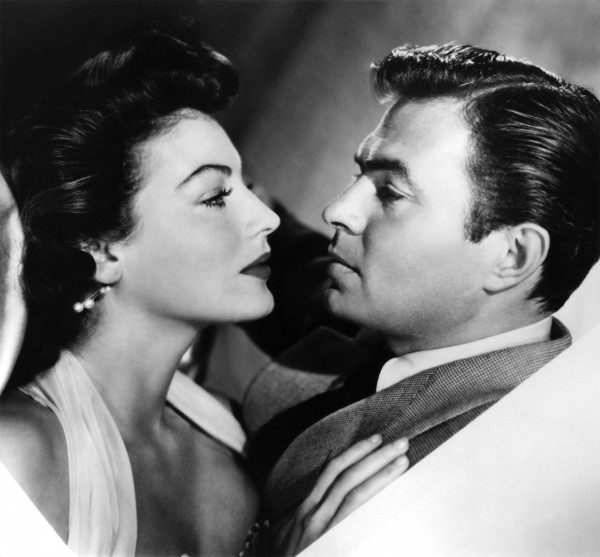 Albert Lewin’s PANDORA AND THE FLYING DUTCHMAN is a film that skirts the borderline of kitsch without collapsing into absurdity. A vigorous, high flown, yet emotionally engaging, version of the legend of the 17th century seaman condemned to sail the seas forever, until salvation comes from a woman who will sacrifice her life with him.

In The New Biographical Dictionary of Film, David Thomson describes Pandora as ‘gaudily ridiculous’ and ‘impressive in a romantic, thundery way’. About its visual style he says ‘In such moments as Ava Gardner in her nightie on the edge of a cliff, romantic sensation comes inadvertently near the vision of Delvaux and Ernst.’

Thomson aptly mentions surrealist artists. Yet there is an even more relevant artist homage. When Pandora Reynolds (Ava Gardner) first meets the Dutchman, Hendrik van der zee (James Mason) she discovers that she bears a great likeness to the woman, in the painting he is finishing, who in turn resembles Hendrick’s dead wife: and the painting itself has a Dali / De Chirico appearance – more so when Pandora physically attacks the canvas and Hendrik paints over the damage, creating a strange imprisoned egg-head look to the portrait.

Their romantic Wagnerian tryst is revealed to us earlier on. The lover’s drowned bodies are discovered in their boat, washed up on a Spanish coast circa 1930s. We see a picturesque close shot of entwined hands next to a fishing net and an opened copy of Fitzgerald’s ‘The Rubiyat of Omar Khayyam.’ The film’s narrator, Pandora’s friend, Geoffrey Fielding (stiltedly played by Harold Warrender) is introduced. He’s an archaeologist and literary gent prone to quoting poetry. “The measure of love is what you are willing to give up for it” Lines repeated throughout a film that savours its love of poetry and myth.

If all this poetry and art makes the film sound pretentious that’s not so. Pandora has abundant romantic passion – greatly aided by the tone of Jack Cardiff’s beautiful Technicolor photography. Concise dramatic music from Alan Rawsthorne. Good performances from Pandora’s other suitors and female rivals. And Ava and James convey a seductive and expressive eroticism. (They’re like characters clashing in a Powell and Pressburger movie.)

‘Watching this film is like entering a strange and wonderful dream’ is what Martin Scorsese declared. If you’re a fan of doomed love stories like Portrait of Jennie or Vertigo then Pandora and The Flying Dutchman will have you sighing with pleasure. To watch the beautiful Ava is to willingly give up everything for this radiant Hollywood star. So dream on in Gardner and Mason’s presence in this superbly restored film, now on Blu-Ray. Alan Price