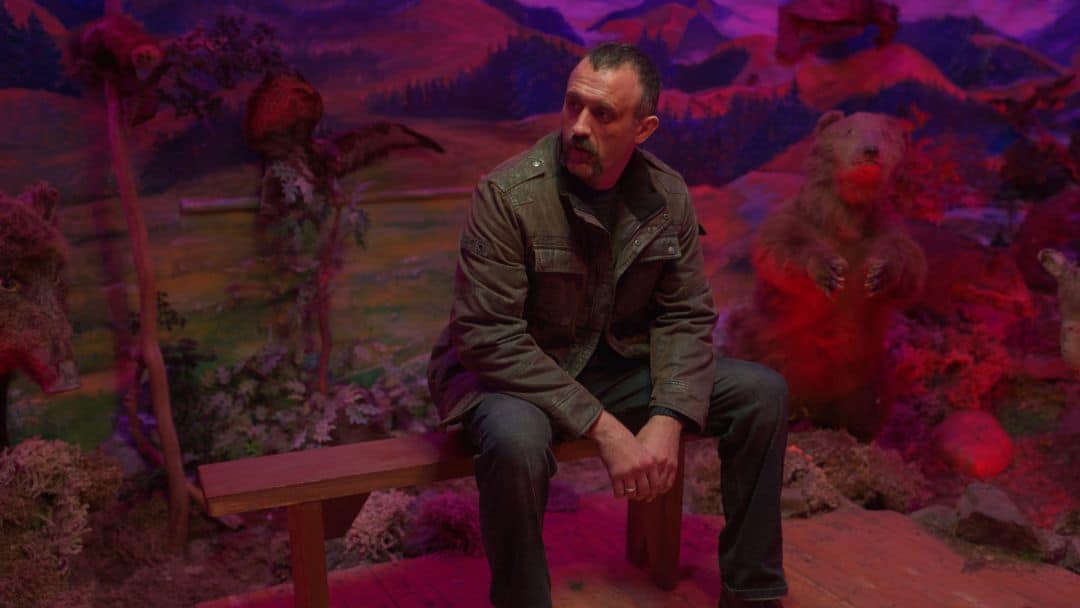 Pamfir may look like the typical gangster movie, but it turns out to be quite different from any other genre outing: a noirish fairytale Western where the Indians have been replaced by wild beasts from the past. It all unfolds during the folkloric Malanka festival in the wild and inhospitable western part of Ukraine’s Romanian borderlands around where the director grew up, .

Leonid (Yatsentyuk), also known as Pamfir – which means stone returns home to his village after a stint in Poland. His wife Olena (Kyrylova) and teenage son Nazar (Potiak) have really missed him and their re-union is emotional. But not so with his father Pamfir’s (Makoviychuk), who lost an eye after a fight with his son. Victor’s grandmother (Khoknahlatkina) tries, with the help of her younger son Victor (Sharan), to bring the feuding men together, but the feud continues.

It soon turns out the whole family have been involved in smuggling contraband to Romania, with Pamfir as the ringleader, earning the nickname of “Godfather”. He now wants to go straight but his attempt to reintegrate into mainstream society are scuppered when his son Nazar burns down the local church, destroying not only Pamfir’s documents bit making his father liable to pay compensation. Working with his sidekick , “The Rat”, he continues his illegal trading with Romania unnaware of being watched by another gangster who goes by the name of Oletsa (Yarema) and his men. Oletsa not only runs the smuggling operations, but also the church. Oletsa’s men attack Pamfir, asking the crimelord to do “one last run” to pay back his debts. But, as usual, there is a snag: the tunnel, leading to Romania is narrow, and only Nazar will be able to get through.

The focus then turns to Olena whose back-breaking job at her father in law’s factory, keeping the family afloat, also contributed to the loss of her first child. She now becomes more and more instrumental in ending Pamfir’s smuggling career once and for all.

DoP Nikita Kuzmenko’s heightens the atmosphere of terror that propels Pamfir in primal almost poetic journey. The camera is constantly on the prowl in long tracking shots through foggy woods encompassing vast widescreen landscapes and ancient forests that belong in a fairytale. And this is exactly what the director is aiming for: the villagers’ straw costumes during the carnival celebrations; their wooden masks, garishly painted, bring to mind the ghastly ritual of pagan festivals and the fear generated by The Wicker Man. The ghastly brutality of this atavistic festival resurges through Pamfir’s effort to liberate himself from the violence of the modern day. Gorgeous to watch, full of twisty revelations, PAMFIR is a stunning feature debut. AS