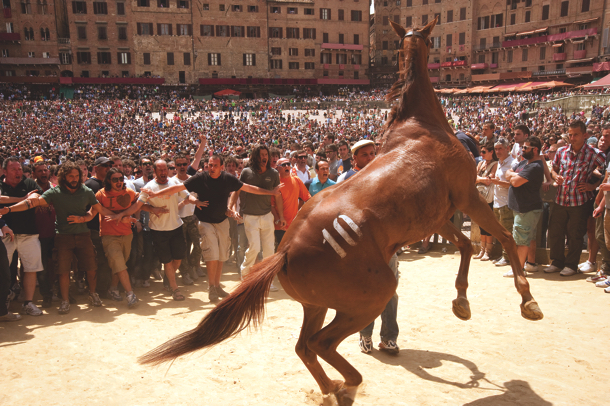 Filmmaker Cosima Spender (Without Gorky) has picked a fortuitous year to document the Palio; a medieval horse race held biannually in Siena, Italy. Her two antagonistic protags are at logger-heads to win the race and one of them will succeed but will it be the young and vigorous newcomer or the skillful, long-time winner? 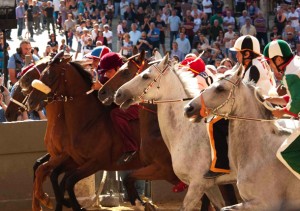 Entering the arena at breakneck speed, we instantly experience the high octane thrills of this ancient and intrigue-fueled 90 second spectacle with its hot-headed characters and magnificent setting in the Tuscan city. Playing out like a sporting classic with dramatic twists and turns and even the occasional tragedy, the contest is arcane and impossible to explain, let alone understand – but who cares – the thrill is all about the spectable, the horses and the ‘fantini’, as the riders are called.

Plucky veteran Gigi Bruschelli is in 40s and the winner of 13 Palios in the 16 years he’s been competing for his ‘contrada’, or local district. Only one man has beaten him in his record: Andrea Degortes, nicknamed Aceto (Vinegar), he has claimed the prize 14 times and is used to sitting proudly at the head of the every local dinner table, such is the respect the community affords him. Meanwhile, ambitious 28 year old, Giovanni Atzeni, is motivated by the Glory rather than the money – unlike most men of his age-group. Trained by Bruschelli, he is determined to be the victor in this year’s contest, held in the Piazza Centrale packed with an audience of around 70,000 spectators. Rife with bribery and purported corruption, the Palio is the central focus of Sienna during the months of July and August and occupies the players well beyond. Citizens, caught up with the excitement of it all, bay viciously from the crowd – the more successful the riders the worse the abuse. In contrast, competing horses are often rejected from the competition for being too fast or too slow in order to encourage a tight contest, in which the riders hit each other savagely with crops fashioned from dried ox penises. But, in the end, it’s all a game. Another retired competitor, Silvano Vigni, is content to run his farm in the magnificent Tuscan countryside whence he regales us with a potted history of the Palio, made even more resonant by his strong local accent. 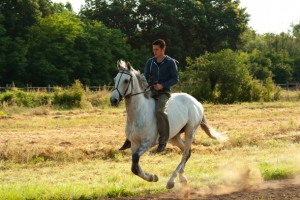 Well-paced and with a twang of the exotic supplied by Ennio Morricone’s ‘Secret of the Sahara’ soundtrack, Spender’s PALIO conjures up  to heat of sunbaked Sienna with its colourful characters, glowing scenery, feudal intrigue and exhilerating thrill of the chase. MT

OUT ON GENERAL RELEASE IN SELECTED CINEMAS FROM 25 September 2015